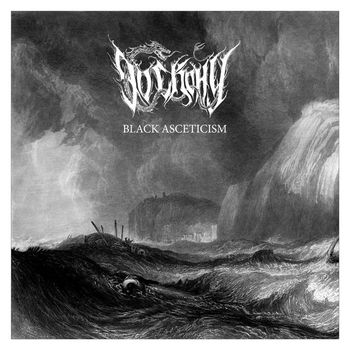 I liked The Grand Awakening Among The Great Sleep, the album by the Ukrainian who named his "band" Do Skonu. That's why, in all my generosity, I thought it would be a good idea to give him a second chance. Here you go, curtain up for Black Asceticism.

It's a pity that the 2019 work can't match the class of the 2014 album. The Grand Awakening... is darker, more mystical and achieves a deeper effect. In parts, Black Asceticism gets in its own way, for example when 'Separate Reality' in fourth place is a piece that is nothing more than a performance of somewhat irrelevant sounds. This damages the flow of the album more than it helps it. The same applies - to an even greater extent - to the keyboard-saturated 'Circle Is Closed'. But well, we are only talking about two brief interludes here. The bigger problem is the sound, which is a bit too clean for my taste. This results in a deficit of blackness. The hypnotic element in the music is also largely missing. 'Black Asceticism' trots along at a leisurely pace on a long path in a melancholic mood through the forests of Ukraine. One can join this path - in the comforting certainty that one will not die of an excess of tension on this journey.

All my complaining does not mean that Do Skonu have produced crap. Not only the stylish cover is compelling. Many guitar lines prove the artist's grasp for effective melodies. His core competence lies in designing dragging, at best medium-fast tracks. But even the faster, initially richly emotionless '(Aum) Supreme Truth' still develops splendidly.

The highlights of the full-length are nevertheless other tracks, such as 'Fields Of Blood', an instrumental with an excellent flow and brilliant guitar lines. Surprisingly, one does not miss Mr Varagian's voice. But that does not mean that it detracts from the compositions. On the contrary: his grating croak enriches the atmosphere of the pieces. Speaking of atmosphere, in this discipline 'Eternal Non Return' has a very large, extraordinarily tasty portion to offer. To avoid misunderstandings: yes, the keyboards also contribute to this ambience. But they only take over the melody for a short time, the great guitars, which do not hide their wistfulness, are more decisive. This song could undoubtedly be a wonderful soundtrack to a dark, Eastern European fairy tale.

All in all, I have no regrets about spending money on Do Skonu again. Although I largely rule out that it will be my last wish on my deathbed to listen to this album again, of all things. But that's only because I've resolved to become a Sabaton fan in the last half hour of my life. It's better that one of them dies than that it happens to a black metal enthusiast. (Final note: as far as I can see, there are no idiotic political/racial theories here - and that's good this way.)