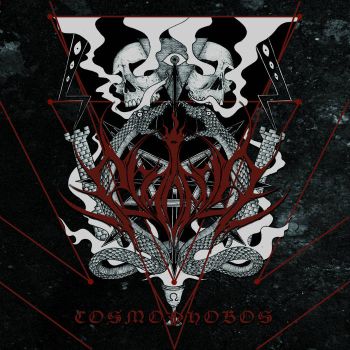 Actually, I'm not a big fan of songs longer than 5 or 6 minutes, but this EP called Cosmophobos by Brazilians Pralaya has something going for it, even though the three songs last between 8:30 and 14:30 minutes. The opener 'Agios o Baphomet' starts with a cool intro from the movie "The Devil Rides Out" and already provides nostalgic feelings for the listener. After that the band starts with classic black metal, which is mixed with thrash elements in parts. There is mainly European black metal bands here but also the tribute to usual suspects from South America. Vocals are alternated between black metal and clear vocals, which brings additional variety to the songs. The first song impresses with many breaks and tempo changes and a short acoustic part, which always drive the piece forward and do not let boredom arise.

'Cosmophobos' is characterized in the first minutes by a basic riff that keeps recurring. It is a with-tempo song that knows how to please with hateful vocals and catchy passages. However, the instrumentation is a bit wonky in parts, but that fits well with the old-school charm. Towards the end, the song picks up speed and knows how to grab the lover of the old-school BM school.

The last track 'Anagnorisis (Descensus ad Inferos Gnosis)' is the longest track of the EP with a playing time of 14:37. It starts with a somewhat disturbing whirring soundscape, which quickly turns into a catchy riff. The anthemic vocals fit into the chaotic sound picture and the drums seem a bit chaotic, also. But quickly the spook is over and the track runs in more orderly ways again, with the drummer definitely setting a pretty brisk pace. The vocals are again in two voices, shrieks and a demonic voice, which partly overlap. The Celtic Frost ‘ugh’ is also interspersed. But also in this track the band again shows their multifaceted skills by frequently changing the tempo and alternating thrashing with many catchy parts. Only the slightly hectic screamed vocals seem a bit out of place.

The production is unfortunately a bit unclean, the sound in places is very reverberant and the drums sometimes too tinny. But I think that this is quite negligible if you like old school black metal that does not come across artificial.

I would recommend those who like orthodox European black metal paired with South American influences à la Sarcofago, Vulcano or very old Sepultura to at least risk an ear!!!!