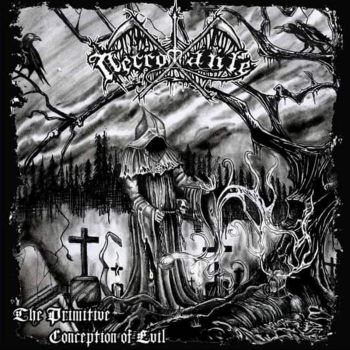 Does anyone else know the book (or movie) "The Relic" by the great authors Douglas Preston and Lincoln Child? When I heard the flute intro for the first time, I felt directly transported to the jungle, where some natives chew strange leaves to put themselves in a trance and summon the Mbwun. Given the current weather conditions in Germany (snow and -10°C outside temperature), quite a remarkable feat, especially when walking through the streets of a major city. Well, I survived the walk and didn't get eaten by the monster.
So, the intro of the EP The Primitive Conception of Evil of the Brazilians Necromante knows how to grab the listener, but can the rest of the album do the same?

The band starts with 'Fire of Death' with a pretty punky riff reminiscent of old Venom or Motörhead. (I say old Venom because I played "Temples of Ice" to a friend the other day and he claimed it didn't sound like Venom). However, this is only maintained for a short time and soon a good pinch of old thrash in the style of Kreator or Sodom is added. The singer also sounds pretty much like Tom Angelripper rattled off in his early days. On the next tracks there is some South American black metal like Mystifier plays it (some fast rumbling and some slow doomy parts). 'Rising from Hell' is a catchy mid-tempo song, which also contains some doomy passages. In any case, the above-mentioned influence can be recognized here again.

It follows again a short (acoustic guitar) intermezzo, which is nicely arranged, to then pick up speed with 'Necromante'. Again, slightly doomy passages are incorporated into the song, which makes it a very varied track. With 'King of Blasphemy' it becomes clear right at the beginning why Necromante likes to use doomy passages in their tracks. The opening riff could also have been used on one of the first Black Sabbath albums. As an ardent Black Sabbath fan, I find that quite likeable. If you listen to the album several times, it becomes more and more obvious that besides the already mentioned influences, Black Sabbath might have served as a great source of inspiration for the CD. Also in the last track 'Lucifer' the beginning and also the riffing between strongly reminds of the British heroes (I say only "Iron Man").

Production-wise, one could still improve a bit here, the whole sounds pretty raw and unpolished, but that has a certain charm in my eyes, which might otherwise be lost. The band convinces with good song structures and arrangements and has gained another listener through me!!!