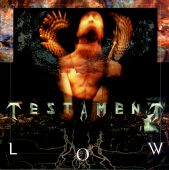 Testament was a band I always avoided for the very reason of always being unoriginal and creating such generic metal songs with boring song-structures, and if you didn’t realize it before, this album will make it painfully clear. Throughout the whole thing I sat there, just waiting for one original song segment that would give this album some personality, something of its own, but that moment never came, from first track to the last, "Low" offered nothing but one mediocre song after another written obediently by the rules of the boring, repetitive rock-and-roll song structure.

There are but two exceptions to the comment I made about "mediocre" songs: 'Legions' and 'Dog Faced Gods'. These two songs, while still employing the repulsive aspect of unoriginality are actually really good. The first endows some very impressive riffs and heaviness while the latter conjures a mysterious ancient Egyptian sound and feeling, and both songs have Chuck Billy experimenting with death metal vocals! I’ve no clue why, but these two songs are the only ones he does them on.

Another track that could be considered a hair above the rest is 'All I Could Bleed', but this is about it. I don’t know what Testament were trying to create with this album or who they were trying to impress but they certainly didn’t do anything about either of these. This sounds like a quickly-written, little-cared-for, mass-produced average album that Testament hoped only their pretty clean reputation would sell. Well, this album has given their reputation a very greasy-filth shit-stain in my book. It’s because of this album I was even known to quote the strong words "Testament sucks". Well, they don’t suck, but this waste of plastic called an album certainly does. Their worst album ever, I’m disappointed.

Bottom Line: I curse the day I bought this album, don’t make the same mistake!