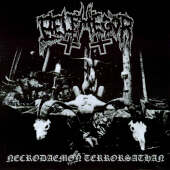 My initial impressions of Belphegor were ones of extreme skepticism and much eyebrow raising. The black/death ‘we hate Jesus and sodomise God’s children’ bands have pretty much drenched that to the bone, leaving other new outfits very little to nibble upon. Belphegor is one such band. Playing an overtly familiar conjoining formula of black speed and death metal riffs and solos, “Necrodaemon Terrosathan” isn’t exactly worth salivating at the mouth for. But if you’re the type who can’t abide change to the black/death genre, that outfits like Myrskog bring, then Belphegor are your agents of the anti-Christ.

Sporting axes, brandishing clubs and garnished in ammo belts and tight black leather adornments, originality clearly is not in the forefront of the lads from Belphegor minds. Instead consistency and conformity would be; consistency with the music; and conformity to dress like twits. Being the heathens that Belphegor are, they come ripe with the most anticipated song titles ever for this genre; ‘Vomit Upon the Cross’ and ‘Cremation of Holiness’ could have easily been lifted from any Cannibal Corpse or early Hypocrisy album. It is cliched trappings like these that make Belphegor difficult to digest from the others...

Belphegor however, are not without merit and remain to be seen as slightly more creative and innovative than some of their genre mates, and “Necrodaemon Terrorsathan” is fortunately lifted by this fabrications. ‘Vomit Upon the Cross’ for instance (despite its stupid title) starts off with a seemingly placid intro of Gregorian monks chanting before launching into full force of blast beat drums and brutal guitar riffing ala Hypocrisy and Morbid Angel. ‘Diabolical Possession’ features some very smooth vocal work that sees either Helmuth or Marius spew forth lyrics like they had spent five years in the Amazon and learned the native language perfectly. With factors like those and other small smatterings on “Necrodaemon Terrorsathan” that really save the album from falling into the average category. Overall...ok.

Bottom Line: “Necrodaemon Terrorsathan” is an ok album, that is summarized by predictable song titles, silly gimmicky attributes with the band members, but also possessing enough surprises to keep in from being relegated to the run-of-the-mill bands in the black/death genre.