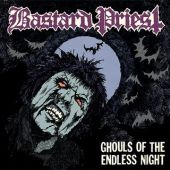 What do you get when you cross Old School Death Metal with some irreverent and sometimes all-too-cheesy Satanism and add a splash of older styled Hardcore to firm things up? Give you a hint. They are from Sweden, there are only two members in the band and they make one hell of a noise. Give up? It is Bastard Priest.

In the world of extreme metal, crawls out Sweden’s Bastard Priest. A band that seems to have it all. They are heavy, fun and strongly defiant in every sense of the word. Then you listen to it a second time, and it is not as fun as it had been. I love old school, but it needs to be able to keep my attention longer than one play and Bastard Priest does not. It is good, but nothing I could say that is 'special' about it.

Tracks like the incredible Punk/Death mixed assault of 'Pestilent Force' not to mention the Death Metal Mantra of 'Sacrilegious Ground' shows a band that has all of the tools, but somehow it does not capture the imagination for very long. Bastard Priest are loads of fun to listen to, but the staying power is far from being there. The band is close to getting to that level, hence the hesitation on my part to even say these points, but not right now with this album.

I already know that I will not be replaying this album much in the future, but I will keep an eye on the band themselves. When they do figure out that magical formula to keep interest longer than 37 minutes - I wanna be right there to take in every last note and word. For now, I am simply underwhelmed with what I am hearing, and that is a shame.