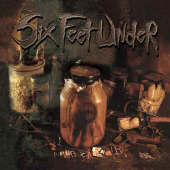 Death-sludge gorefest music has never impressed me much, the most noticeable flaw being an absolute lack of variety. Six Feet Under has rarely escaped that bubbling cauldron of monotony in the past, and with True Carnage, the legendary Chris Barnes and company have perhaps skirted it once again, this time with a little more slack.

In a strange way, this album sounds a little like a parody of itself and its genre. Chris Barnes does his trademark deepest of the deep gurgling growls and tosses in the occasional anti-growl that sounds much like a three-foot goblin getting squished under the foot of a two-ton ogre. The music is paradoxically smooth and choppy at the same time, but nothing really special is occurring here on whole.

None of this is to say that the disc doesn’t have highlights. Opening track Impulse to Disembowel was pretty entertaining and at times very funny. Also, the variety offered in Sick and Twisted is something I’d like to hear a little more of from SFU. As for the metal-fundamentalist vs. nu-metal controversy with Ice-T’s appearance on the track One Bullet Left, I think it was done really well. Ice-T has always been hardcore and he just topples right over the edge with his extreme violence depictions in this one. I never thought I’d say that hearing rap in metal is refreshing, but this is definitely worth listening to with an open ear.

All in all this is some of the best stuff I’ve heard from SFU, but it doesn’t really take you anywhere really new.

Bottom Line: SFU fans, should they be flexible enough to entertain the concept of rap’s most intelligently notorious and hardcore propagator making a brief and brutal appearance on this album, should be quite pleased.