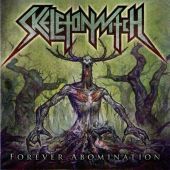 Type: Full-Length
Release Date: 2011
Label: Prosthetic Records
Genre: Black, Thrash
1 This Horrifying Force (The Desire To Kill)
2 Reduced To The Failure Of Prayer
3 Of Ash And Torment
4 Choke Upon Betrayal
5 Erased And Forgotten
6 The Infernal Resurrection
7 Rejoice In Misery
8 Cleaver Of Souls
9 Shredding Sacred Flesh
10 Sink Beneath Insanity
11 My Skin Of Deceit

The advancement of North America’s metal scene is opening the world’s eyes to the brute power of the music. All forms of metal are being represented, showing our blue-green living marble that they still can rock. One prime example is Ohio based Skeletonwitch - one breed of metal that is taking the global metal scene by force.

This band is made of many parts, and blended perfectly. You have parts of Scandinavian Black and Death metal, straight ahead Thrash in the Bay Area style and lots of classic NWOBHM era bands - the result is a band that has a perfect balance between having serious heaviness, mind melting speed, virtuosic melody and shitloads of pure attitude- not the smug selfish kind, it’s the kind that is simply humble yet well earned.

So many songs over the course of this album are so perfectly crafted and masterfully executed with such aggressive perfection, I could not pick one song to showcase, or even one to critique in my normal hard assed way. The album is so well produced with fully realized songs that are smart, impassioning and boldly malicious as every single note and beat cuts straight into one’s very soul.

I have heard every album now... and this is one of the few bands that never really made a ‘bad’ album, while maturing into a well respected band. This album is the best of the entire Skeletonwitch catalogue, showing how creativity in metal has not been lost, but always had been there - and they are at the forefront showing off that North American metal is in a league of it own and is overshadowed by no one.