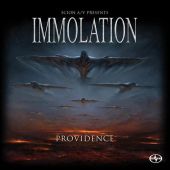 Once again death metal is in capable, battering hands when Immolation decides to open thy gates of hell and issue songs of violent design. The new EP Providence is one additional rung in the death metal ladder that is as defacing and deadly as anything they’ve put out beforehand, as this band has not one bad album in its whole discography.

“What They Bring” starts the experience quite horribly, literally punching in your face and issuing some of the same to the entire industry of music that ignores and belittles the metal world. The totality of Immolation’s brutal, yet distinctive sound is never diminished or thin, and this EP keeps the lineage indelibly invasive and vastly potent. “Illumination” absolutely destroys the dead air in the room by providing a haunting tone to the barrage of drum beats that literally move the blood at breakneck speed all through the body. Between this and the Autopsy album earlier this year these two American death metal acts are keeping the faith in death metal ever strong.

As usual Ross Dolan growls his way through five amazing tracks that prove that Immolation isn’t going anywhere anytime soon. That gurgling, pervasive vocal is what the genre was built upon from day one - the resounding sound of razors being spat onto unsuspecting Bieber fans! Also happily expectant is the thick drumming of Steve Shalaty, which kicks the listener in the teeth and it’s one of the most memorable things about this EP for me. As tight as ever, Immolation takes these five pieces of sickening art forms and utterly decimates their peers. “Swallow the Fear” is seriously one of the best Immolation tracks I’ve heard, and that says a lot considering how far back I go with this band.

The leads in “What They Bring” keep bringing me back to the track and ingrain them in my head because they’re so turbulent, and it’s pretty much like that with each of the other songs as well. This is an EP for the true death metal connoisseur and will separate the men from the Goths in eight notes of “Still Lost”, which carries in it one of the most destructive drumming sessions I’ve heard in some time; moreover, “Providence” talks of “raining death upon us” and makes you want it so intently, no matter how painful it might be. This is my favorite track because its caustic lyrics and tonal anger are both brilliantly crafted. Immolation is simply a band that does no wrong in a schoolyard bursting with shockingly mundane peers and pretenders that, frankly, need to be hit with the poser stick a bit harder and more often.

All over the board Providence is just an agitated venture into the lambasted psyche that can always use some further damage. For now this is a free download, but will be given away in CD and vinyl formats at the shows so there’s no excuse for you not to own one, right?