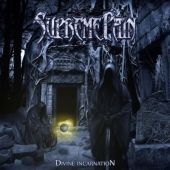 Death Metal has been growing like crazy, showing the world the majesty and gut wrenching power of this extreme end of metal. So many variants of the Death Metal style have been created that it take no imagination that this genre shows that it is not all just pure noise, talent is not just for the conformist pop or country artists but for all who are passionate about what they do.

Netherlands based Death Metallers Supreme Pain forge a unforgettable attack of intensity and aggression that is hard to ignore. Combining the nasty heaviness of traditional Death Metal with intense blastbeats and darkened riffs straight out of Black Metal and adding a very unique sense of melody and complexity they create some of the most unforgettable extreme metal that has ever come out of the small country.

With ten very complex, talent fuelled and heavy tracks which make up "Divine Incarnation", it is hard to pick a few stand out songs to write about because each track is truly pure metal gold. I pick two tracks I feel the most about - the dark nastiness of 'Damned Creation' and the blood soaked magnificence of 'The Fallen Kingdom'. Each song is such a musical and lyrical standard, they both have epitomized just how good the rest of the album is.

I feel sorry for those people who cannot see the talent in metal. If they could, they would see a army of amazing musicians with talent that outshines most other musical genres. Supreme Pain’s album just makes my statements case with absolute clarity. Enough said? Yep! If those closed minded people still dont -fuck'em.