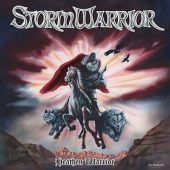 I hear something that sends my soul into pleasure? Hearing the very distinctive drums, intense shredding metallic guitars and perfectly exicuted and unabashed vocals. Metal reigns... good, old school and in your face kick the shit out of everyone else metal. Gotta tell you that sounds damned good right now.

Fuelled by the passion and need to make Power/Speed Metal that would make every metallic heart lift the horns in respect, Germany’s Stormwarrior brings the old school into the new metal millennium. Known for years as one of the elite metal bands in their homeland, they have been pretty much unknown over here in North America. What I have heard here, and have experienced on this CD... I smile and raise a beer.

"Heathen Warrior" is this the bands fourth full release (having four ep's, two demos and a live one) finally shows us here in the west just what metal is. Songs such as the potent riffs of 'Fyre And Ice' or the memorable title track shows this band does bring the passion and might of old school into the new age with pride... because they never lost any of the fire or passion that was once there. Coupled by the fact that they have talent and desire, Stormwarrior is the perfect band to bring the old into the new.

The production was not as good as I thought it needed to be, but hearing the material I seem to be alright with it. Stormwarrior has a album here that begs to be heard. If you have anybody new to metal get them this album. It teaches just where metal has come from, and shows us where the hell it is going... not to mention why it is here in the first place. It my be a old school but it does not feel like it is. Just feels real to me.
Enough said... need beer now.