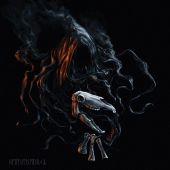 Beginning in the traditional lo-fi demeanor we’ve come to expect from true black metal releases, Arckanum issues its seventh full-length release in Helvítismyrkr, a disturbing venture into the mind of mainman Shamaatae’s disheveled psyche. With all of the speed, revelry and sardonic wit of past releases, we’re once more dragged kicking and screaming into the abyss of a damaged chemical craft.

What is most intriguing about Arckanum is how we surreptitiously await his newest foray into all things dark and desolate. Coming off Sviga Lae, which was quite good if you know what to expect going into any Arckanum release, the proverbial black light was on this effort to see if anything new would or even could be implemented. What we have here is much of the same Arckanum, but for this lone writer’s taste it’s fine just as it is. With certain bands that are Norwegian by location and shall remain nameless, a venture into the gothic mall fanbase seems to suit them just fine, and the change there was both drastic and quick. A band like Sweden’s Arckanum is as raw and primitive as it gets and expectations are usually set in the fact that we don’t want Shamaatae to shift gears too much. As long as the ideas are original to the concept of the band and not rehashes of past glories, then we await with a tortured silence for his next jaunt into the din.

The album is much better produced than past efforts, which is always a plus. 'Myrkrin Vinna Hefnt' shows the range of both tempestuousness and a subtle ebon that covers the music with a sheer coating of intelligent effort and honesty. As soon as you’re captivated by the partial fast black metal that races through your head like a freak lightning storm you then find the ‘eye’ of the storm in the slower, draining tones that are specifically designed to shatter your comfort zones. When you expect a left or right turn, Shamaatae stops dead and rattles your frame for gratuitous seconds at a time, all properly placed among the hellish chords. What I like about Helvítismyrkr is the transition into straight ahead thrash and speed in certain areas, but this is nothing new to Arckanum. While still retaining blackness unfiltered, Helvítismyrkr offers a primal visual into the emptiness and volatility that each one of us employs but doesn’t address; the album denies convention and fills the voids with some pure metal music for the descending soul. 'In Svarta' capitulates on the premise of Celtic Frost-like music ala "Monotheist" with such brooding music. Not to follow the derivatives, 'Nifldreki' picks up the pace with the same tremolo-picking that good black metal unapologetically utilizes to the nth degree. I always especially enjoy the vocals, which are more a breathy sneering than the typical screeching that makes me want to throw the CD across the room with violent abandon. Every song here is as black as it can get these days without falling into the pedestrian traps set by too many a diseased bandwagon rider. For much of the same you can only hope and expect Arckanum to keep putting out quality music of this order. My favorite track is 'Svartr Ok Þursligr' for its old-school black thrash sound that is nowhere near conventional or trivial, as many late comers to game these days distribute with ignorant selfishness.

There will be nothing exactly new here in terms of the sound or even the style, but true Arckanum fans will not be disappointed. Quite simply, if you like Arckanum for its progression and growth, this album will supplement your need for speed.