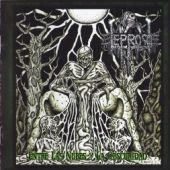 Death Metal comes in many versions and even sub versions as well but all have one thing in common when it comes down to it... sheer brutal sonic assault. I have heard many of these bands, and enjoyed many and of course found a few to be a waste of recording time and energy. It is the nature of the beast, and one that I am happy to be witness to, no matter if the band is good or bad.

Illinois based Leproso is one Death Metal band making their way through the onslaught of many bands and seem to be elbowing to the front of the pack. Mixing Death Metal from both the more simple yet frantic 80's and the nasty blood splattering versions perfected in the 90's they take it all and craft something that seems so familiar, yet still brings this fresh sound with a blistering power that is bigger and meaner than ninety percent of the acts out there. A feat that some bands never achieve. Leproso, seems to have found the foundation for what they do.

With the whole album sung mainly in Spanish, that fact never once takes away from the music. With gut hammering riffs that seen to bring a brutal assault to ever sense they can reach inside of a human being, Leproso does it in a big way. With each bulldozing note and intense beat they draw you into their music, even if not one word is understandable, that is the way a band operates.

It does not take an advanced degree in music to see that Leproso is an incredible band that I am sure will gardner a huge following in the metal scene. They have not made anything different or newer, but what the band is, is simply a good very heavy, intense blood splattered band that plays great music.