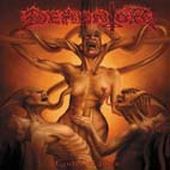 Slovakia's Dementor had already been around for quite a while when they dropped this one. Playing in the same ballpark where you can also find the likes of Behemoth, Nile and Belphegor, the band churn out a similar sort of blackened death metal with an occult edge to it. I heard that in later years they switched to brutal death metal, a step that's not hard to imagine. It's not that far removed from what they present here.

Their style on this album is, as stated, the sort of death/black metal that was at the same time also employed by the likes of Belphegor and Behemoth, but in the riffing there are some other influences to be found as well. I sometimes hear Nile popping up and the guitar leads have an undeniable Morbid Angel feel. There is a difference however, the bands mentioned know when to take the foot of the accelerator to allow for dark atmospherics to permeate in their music. Dementor, however, just keep plowing away at top speed, bringing to mind Brazilian speed monsters like Abhorrence, Rebaelliun or Nephasth, but less memorable. I can't really put my finger on it, but where the Brazilians succeed in creating a vortex of highly volatile menace, Dementor fail to stay interesting for the whole run of the album. It all sounds massive (thanks to the Andy Classen production job) and the unrelenting barrage of hammering percussion and raging riff work smack you around without mercy but after 4 or 5 tracks I pretty much had it. It just begins to sound like one long song, not just because of the constant barrage of speed but also because the individual tracks all sound the same. Halfway through the album i started thinking "here they go again" and that can't be the intention here.

I admit that this isn't a bad album in any way. It sounds great, has energy coming out of the wazoo and has the adrenaline pumping through your system like mad but when I reach the middle of this piece, I've had it. Basically, it's a great album, to be consumed in bite-sized bits to avoid losing interest and yawning in general.