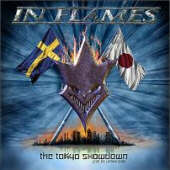 Lots of bands do it, and some, like Iron Maiden or Iced Earth do it really damn well; they put out a live album that retains most to even more of the intensity of a studio album and bring new dynamics to the songs. Is this what In Flames tried to do or did they just want to satiate the thirsting ears of their fans?

I came very close to putting my head through a wall when I heard one of the most badass of Flames tunes, Bullet Ride, open up this disc with downright rotten mixing and a mediocre performance. What I heard was vocals that almost seemed strained and weary, guitars that seemed to be softer with a far more fuzzed out sound, a complete lack of bass and drums that were only popping on the high-end. Starting with such a low point I could only hope that the sound would get better.

There did seem to be a gradual, albeit hardly noticeable, improvement with the mighty Jotun. The improvement became noticeable with Moonshield and even better with Clayman through Behind Space. These tracks did bring a few new dynamics to the songs and a couple of times even managed to give me goose-bumps. That isn’t to say that they were as good as the studio tracks or a personal live experience, but as a fan, my ass started to quiver and shake.

So just as I was becoming a happy little In Flames monkey, Only For The Weak came around to beat that notion of hope and happiness to the ground. What happened? We were doing so well and suddenly… kerplunk! The mediocrity takes on a firm grip right up to Colony, where we see slight improvement again and finally a pretty damn good rendition of Episode 666.

I felt guilty ripping on this band, but then I came to realize, it’s just more of the mixing/recording qualities that I had a problem with. High points do make it a need for any fan though.

Bottom Line: This is both a bed mint for crazed fans that needed something to tide them over until the next album, and it does seem that not much effort was put into making this live recording memorable.