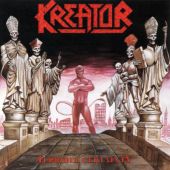 It's certainly true that Kreator abandoned their extreme (and boundary pushing) roots going into their third album, 1987's Terrible Certainty, at this point featuring a tighter and more straightforward thrash metal approach. However, the direction feels natural for a maturing thrash band and there really was no need to attempt to make another Pleasure To Kill- Mille had become a more socially conscious person, so the change in lyrical content on Terrible Certainty only reflects this. Meanwhile, the joining of a new guitarist and the more refined playing and execution from the existing band members feels suitable with the abandonment of crude lyrical themes anyway. To me, it's similar to what would happen with Sepultura from Brazil once Andreas joined on guitar, going from "Morbid Visions" to "Schizophrenia" this same year.

Endless Pain was a damn cool thrash/black attack that showed ambition, and Pleasure To Kill is a record that every metalhead loves, due largely, I think, to the consistency of the tracklist - all killer, no filler. Classic extreme thrash in every sense! However, I'll still take the early work of Celtic Frost, Sepultura, Slayer, and Possessed for my 80's extreme metal, because I do feel that Kreator reached their fullest potential, and most honest creative vision, with albums like Terrible Certainty, Extreme Aggression, and Coma Of Souls- you know, their non-extreme thrash albums they released before experimenting with their sound. Terrible Certainty, though, is the first and best album of this era, like a second debut in a way. The ideas are so coherently executed, the riffs cut though like a lawnmower blade through swiss cheese, and every moment exudes passion and intensity in exemplary thrash form. This album isn't as gloomy or detached as Destruction's albums circa this period, nor as cruel and outright punishing as Sodom's, but it is exhilarating in every sense and proves that thrash metal still had plenty of its finest hours to offer going into the later part of the 80's.

I generally have a lot less to say about thrash metal than doom metal, but Terrible Certainty is easily in my top 5 thrash albums, so I do have a fair bit to say about it - the first point of which actually happens to be parallel to doom metal circa 1987. The structure of albums like "Day of Reckoning" by Pentagram are, as vastly different as Kreator may be than such a Sabbath-like group, not dissimilar to Kreator's structure on Terrible Certainty - you start with a banger or two, before building up to something more involved towards the middle (in this case, the title track and 'Toxic Trace', broken up by the Ventor-sung 'As The World Burns'), then having more sublime deep cuts ('One Of Us') and finally closing on a more emotionally powerful note ('Behind The Mirror'). Don't worry, contrasting this album with dinosaur doom isn't the meat and potatoes of this review, but that pacing to the intensity here is just something I found interesting, and it is probably something that makes this a doom metal fan's favorite (or one of their favorite) thrash album(s).

Songwise, Kreator's got emotional, dynamic riffing and delivery down to perfection. 'Storming With Menace' is the banger most people remember well from this album, and coupled with the preceding opener 'Blind Faith', it's not at all hard to see why. Both have unforgettable refrains, with 'Blind Faith' relying more on Mille's vocal delivery and 'Storming...' relying more on an unnerving progression. Both of the first two songs here would make a very cool 7" and that would still be a 10/10 thrash release in my book. The title track has more buildup to it (see the intense opening riff) but is also somehow more immediate with the main hook and familiar chorus. However, my favorite instrumental segment on this album has to be the beginning of 'Toxic Trace', which makes "Tornado Of Souls" by Megadeth sound less like a technical thrash marvel and more like wanking buffoonery with no balls, which it's not, but Toxic Trace still blows it out of the water compositionally. It's also the perfect balance of a relentless assault (especially the jaw-dropping chorus) and a more sophisticated approach. Certainly, the palm-muted riffs played primarily on the A and D strings break up the unforgiving thrashiness while still being interesting due to a curious feel. 'No Escape' has elements of melodicism to it, but not in an overbearing way, because if you bring up this album to any veteran thrasher, they'll mention 'No Escape' as a highlight and a prime example of what made thrash classics like Terrible Certainty so charismatic and unforgettable.

This is, bar none, the definition of ridiculously enjoyable and well-calculated thrash. When it comes to thrash with sublime musicianship and songwriting ideas, many albums are brought up before Terrible Certainty, and Coma Of Souls is usually thought to be Kreator's technical peak, but the third album is somehow just the right balance of technicality and unadulterated fury. Everything here serves a purpose and goes in a coherent direction. Essential thrash!

All these experts who say that the third album is the make-it-or-break-it work of a band may be puzzled by Terrible Certainty in view of the further, outstanding career of Kreator. To put it more directly, I tend to the break-it option. This is not to say that the third output of Kreator completely sucks, yet it is far away from the mind-blowing experience which was offered by Pleasure to Kill. In alignment with its artwork, it lacks inspiration. Just listen to the opener. Hectic guitars and high speed drumming seem to be an end in itself. The expressionless vocals of Mille lead nowhere and the rapid solo sounds like a million other solos. Thank God, this acceptable yet pretty average song does not mark the best track of the album, but it indicates the overall quality.

Okay, there are more problematic solos on this album that do not add any value to the respective song. Yet some strong riffs and leads cannot be overlooked. 'Storming With Menace' provides a concise chorus, 'One Of Us' possesses a good degree of compactness and the piercing high speed guitar work ensures a certain recognition value. The same applies for the tribal drumming and the leads at the beginning of the title track. The guitars have an almost hymnal character, but the song fails to develop excellently. At the end of the day, it is just another rapid outburst that fails to impress sustainably. I don't intend to beat around the bush; its individual components are just too weak; a strong, continuous melody line is missing, the riffing remains unspectacular and Mille's vocals are monotonous. His angry, scratchy and slightly gnomish barking is very predictable. Too bad that 'As The World Burns', the only track where Ventor is singing, fails to deliver enthralling sounds. Standard riffing and rather slow-paced drumming form a piece without any upward or downward swings.

By the way, the lyrics of this track continue the extremely poetic tradition of the former releases of the band. Ventor informs that "megatons of death await to explode" and paints pleasurably an apocalyptic picture. Yet 'Toxic Trace' shows a new lyrical approach while dealing with more realistic scenarios such as the pollution of the environment, doesn't it? Come on, it's a very simple approach. The unscrupulous industry is to blame for everything, among other things because of "ignoring the warnings of ancient prophets". Crude understanding of modern business leadership, at least in my humble opinion. However, songs like 'Toxic Trace' or 'No Escape' are neither crappy nor outstanding, they just make some more or less solid noise and that's it. I am talking about furious thrash metal without surprising or even overwhelming details, no more, no less. All trace elements of black and death metal that enriched Pleasure To Kill are gone.

The comparatively soulless sound of the album also does not collect plus points. It remains a mystery why the band changed from Harris Johns to Roy Rowland. The bass guitar is sidelined, the drums lack penetrating power. This situation matches the equally undistinguished musical content. My judgement is clear. As soon as I retire - I just need to endure the next 222 months - I will have enough time to record a Kreator mix tape (in the then modern form) with all my personal highlights of the band. Unfortunately, I don't think that there will be many songs from Terrible Certainty. But perhaps I should ask the experts, before I start the recordings for my tape.