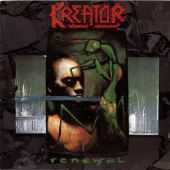 The 1990's, a terrifying era for thrash metal because most of the bands converted to a rock/alternative sound or filler thrash. Sure, Renewal may fall victim to not being pure thrash, but it's definitely not a bad album, not at all.

My absolute favorite part of this album are the drums. They sound absolutely amazing, the snare is solid, tight, poppy, and it fills in every beat and measure greatly. You can't ever go wrong with a solid and amazing snare, absolutely beautiful. The guitars do have a thrashy sound, but rather than being used to create pure thrash riffs and songs, it's designed to have a more laid back and restricted feel and focuses more on the pure sound rather than ability. I suppose you could call this "industrial thrash metal", this is Kreator's first experimental album, and thankfully it's not bad.

When thrash bands try out new things in the 1990's it's usually a shitshow, but gladly Renewal isn't. It's far from a shitshow actually, this is truly a beautiful album and it's really overlooked and mislabeled as a "flawed 90's 'thrash' album". The songs display a huge array of emotion, and it really does speak to me. Whenever I'm in a sad mood, or a chilled-out mood, or even when it's raining outside and it's fucking peaceful and relaxing, this album is perfect for any of those scenarios, especially the rain. Match made in heaven. The simplistic riffs do their own thing throughout the songs and the album, and the more you listen the more you'll appreciate it all. I'd say to fully appreciate and see the true beauty of this album, you have to be in the right setting or a certain state of mind. Like rain, a perfect example. It's just an album that absolutely FITS with an atmosphere like that. It's simply gorgeous, can't really form it into words.

The standout tracks are for sure 'Winter Martyrium', 'Renewal', 'Reflection', and 'Brainseed'. Pretty much the first few songs are the best standout ones, even though every track is realistically. 'Winter Martyrium' is a pretty flexible song, it has several different sections and it's pretty cool. It gives me happy and positive upbeat vibes and I love the drum patterns on it. 'Renewal' is where it starts to get more emotional and where the beauty starts to stand out. The start of the song has a few hallowed strums of guitar with drums that follow, the beginning of that song makes me think of a setting where you're in a city, or a big deserted area, and it's raining and you're all alone. It just makes my head expand and think about the settings each song depicts. The main riff of the song is catchy and pleasing to the ear. 'Reflection' sounds like you're walking in the middle of a small blizzard/snowstorm, you're going against the tough weather while the harsh snow is being blown everywhere all around you, a lengthy challenge, but it'll be all worth it at the end point. 'Brainseed' is a pretty in-itself track, the main aspect of the song is a metallic-sounding smack/hit that's basically a beat that repeats itself over and over. It's simply catchy and it's the main hook of the song. These 4 tracks are the greatest parts and are the backbone of the album that start it off properly and in a good direction.

There may be best tracks that stand out the most compared to others, but pretty much every track has all the elements that I previously described. Every song matter, every song is cool. Nothing really fails here, the band manages to properly maintain an ongoing formula.

The tone of the guitar followed by the song structures and patterns in every song creates a little story or experience I should say. I just think this is entertaining and catchy, I like listening to the whole album and going on a cool adventure and waiting for all my favorite parts, it's an intriguing experience that's super fun and makes me feel an array of emotions. Especially when you're in the right setting, it'll HIT THE SPOT.

Renewal isn't all that bad, it's an album you have to get used to and spend time with to understand it. Is it absolutely perfect? No. Is it terrible? Not in the slightest. Every track has a personality, some may be a little lazy, but at some point in any of the songs it'll have something interesting, and that's fine. Kreator wanted to try something different, and it's not bad. Experimental doesn't ALWAYS mean bad, this is a prime example. Renewal is an acquired taste that's appreciated only by a certain amount. I love this album and I always will, definitely one of my top favorites by Kreator.