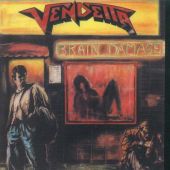 Second tier thrash from Germany can still be a very good thing. Assassin have written a handful of classics (“Resolution 588”), Deathrow scored with “Raging Steel” and even an almost unknown band from Altenessen released two great albums and a wonderful EP at the beginning of its career. Guess they were called Kreator or something like that, don’t know exactly all the names of the second-tier bands (small nasty remark). Vendetta’s second album Brain Damage seems to be something holy for my highly appreciated colleagues, but why? It’s a mystery to me.

Well, let’s start at the other end of the scale. Is it a truly bad album? No, Vendetta’s work sounds lively, it reveals technical competence and quite strong songs like 'War' or the title track mirror the ambitions of the band. By the way, a band that vanished into thin air after the release of this album until it reanimated itself in 2003. Perhaps the split was the logical consequence of the lack of success. Frustration is not far away after having put heart and soul into an album without getting the desired resonance. Indeed, Vendetta had an individual touch, inter alia the bridge of 'Conversation' with its light vocals illustrates this. Too bad that these individual elements were slightly annoying (the funky sequence at the beginning of the album is another example) and so they fell on deaf ears instead of guaranteeing the expected success. On the other hand, exactly this song also houses some precisely matching high-speed sequences. Vendetta’s songs were less primitive than those of the vast majority of their national competitors, the artwork had a special flair and thus one can praise them for this relatively autonomous approach. Yet, as always, individuality is no value in itself, and, as an aside, the band was, despite its nearly desperate search for originality, not immune against the typical – and stale – semi-ballad pattern ('Precious Existence').

What I miss here is a profound heaviness, although the bass plays a rather prominent role. The guitars sound light and lack sharpness, even though I would not call the production inappropriate. It’s a professional, pretty transparent and well-balanced sound. But naturally, it cannot push the somewhat heterogeneous song material on a higher level. For example, the nonsensical 'Love Song' with a length of 70 seconds is followed by an instrumental that starts with the famous melody of Beethoven’s “Freude schöner Götterfunken”. What does a “fun song” has to do with the art of old Ludwig van? No clue - and instrumentals on a thrash vinyl are rarely a good idea, in particular when they almost cross the seven minutes mark. This even applies with regard to the non-charismatic voices of the lead singers. Their expressionless performances stand in contrast to the professional instrumentation and lowers the overall quality. Perhaps it rather speaks volumes about my narrow-minded taste than about the class of Vendetta, but my personal highlight on Brain Damage is the pretty normal, pure thrasher 'Never Die'. It scores with a catchy and dynamic chorus, powerful, speedy guitars and effective breaks. Too little, too late. Vendetta’s coma after this release did not come as a surprise to me and their comeback never caught my attention. By the way, when do Deathrow intend to be back?