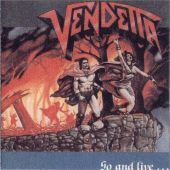 It is surprising to see that a lot of people seem to love the debut of Vendetta. The average rate of reviews speaks volumes. But believe me, nobody took care of Vendetta at the time of the release of their debut. The German metal magazines like Rock Hard, Metal Hammer or Rock Power never wrote many lines about the band from Bavaria. Celtic Frost, Running Wild, Kreator or Helloween were pure gold for Noise Records, but Vendetta did not find a great audience. Please keep in mind that there were also a lot of competitors that had contracts with other companies and many of them (Destruction, Sodom, Iron Angel) also knew how to thrash in a competent manner. Vendetta did not lack technical skills, but 30 years ago, it was common understanding that their songwriting was rather mediocre. To be honest, I still think so. Go and Live...Stay and Die is, to describe it positively, a decent record, but it has nothing that makes my heart beat faster.

Vendetta chose a pretty complex kind of thrash and this approach resulted in overlong pieces. They lacked catchiness and a clear focus was missing as well. The title track, for instance, celebrates an orgy of (sometimes bulky) riffs, but at the end of the day, this guitar wizardry remains futile. There are no parts that leave a lasting impression. The following 'Traitor's Fate' offers a dynamic bridge, so far, so good, but compared with really strong, more or less technical thrash albums from Germany, this tune also gets lost in the crowd. Each and every song of Angel Dust's debut beats the here presented tracks with great ease, not least because of the fact that Vendetta always miss the right moment to bring a song to an end. Especially 'Traitor's Fate' shows this symptom. This lack of compactness is simply regrettable, because it drains the power from the songs.

The vocals sound lackluster and interchangeable. It's obvious that the guy at the microphone lacks charisma. His ordinary voice matches the ordinary lyrics. Very socio-critical, very instructive for uninformed fools like me and always on the morally right side. The album's title was a statement against xenophobia in a country where no right-wing party played any role. Slightly strange, but it's always a good thing to bring yourself into position against a non-existent enemy. Anyway, the lyrics are not the problem here. The musical mix of high speed, average riffs, meandering, sometimes excessive solos and rather poor melodies is just too weak to compete with Paradox or further similarly acting formations. Last but not least, the unobtrusive production also has nothing that gives the album an own identity. Thus, it was no wonder that Vendetta never got a big piece of the cake. Go and Live... is gathering dust on my shelf.