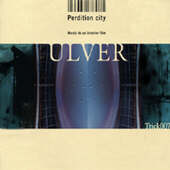 Ulver and Garm (Christophorus G. Rygg or Trickster G., whichever you prefer) were at one stage the essential dark/black metal band. Through “Vargnatt” they started with traditional (?) black metal, “Bergtatt” saw Ulver expand their black/dark origins to incorporate folk and acoustic influences with harmonic clean voices. “Nattens Madrigal” was an extreme noise thoroughfare with a brutal black assault on the senses (said to be recorded in the forest too). “Themes From William Blake's Marriage Of Heaven And Hell”, Ulver were heading down a more avant-garde path to infamy. The “Metamorphosis” EP once again broke the trend of Ulver’s current music trend, and experimented with electronics and synthesizer samples...

Thus we have Ulver and Garm in their present cycle. “Perdition City”. ‘Music to an interior film’ is what is stated on the album cover. ‘...Music for the stations before and after sleep’ is inscribed under the track listing on the reverse. Muddled signs and apprehension crept into my mind once I read those statements. “Perdition City” is no-way known, in any definition of the term; ‘metal’. But crikey it’s a bloody good listen!

Ulver’s latest incantation; the contemporary, city strolling “Perdition City” has Ulver creating gaps in their song structures to pave the way for the thoughts and projections for each and every individual. Essentially, in essence, you and I create “Perdition City”, however much a horrifying or terrific that thought may be, it is the reality. We are the protagonists in Ulver’s new accomplishment. For me “Perdition City” is either a dark sprawling Central Business District (CBD) area in current time or a bleak 1930’s seedy jazz night club, or often both.

Saxophone and synthesizer dominates this release... along with the gaps I was talking about earlier, whether this is good or bad, is obviously up to each individual to discern. Vocals are used like synthesizers are used in your average death metal tune. Not at all, or barely present. There are no real standout tracks, “Perdition City” should be experienced like an Opeth release, from track 1 to track: # (#: insert whatever the last song number is on each album).

Bottom Line: The bottom line is that “Perdition City” is not the metal Ulver we once knew and loved, whether this is good or bad is a tough call to make, “Perdition City” will be forged by the listener, up to you to discern whether your experience of the neo-Ulver will be good or bad.