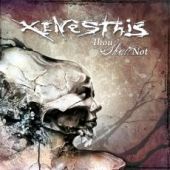 Metalcore and its sister style Nu-Metal are genres that I like to a point, but sometimes I hate because of blatant imitators who just copy and never tries to do things differently. What I look for is an original tilt that stretches the boundaries of the style just a little further out with each note that is blasted out. I guess that is what I look for in any band, but this genre I seem to look a little closer than normal, because of the way it is in the first place.

Austrian based Xenesthis (a type of Tarantula) is one of the acts that has fully explored the whole Metalcore/Nu-Metal thing, and has changed it up into there own image. Sounding like a cross between Avenged Sevenfold and Disturbed with heavier riffing and it is a perfect blending of the music end with some clean and very powerful vocals of Alecto. A young woman with and incredibly strong vocals that parts the music.

There are pretty good riffs going on through out the entire CD, just listening to the Disturbed inspired 'Fool' or the limitless attack of 'Raised Fist Armed' and you will see just that. They are not as complex musically like a Dragonforce or Dream Theatre are with the arrangements and shredding power. As a musician myself, I need to say that a good and memorable melody beats out any technical prowess.

Noticeable recording glitches along with the main glaring mistake with just how the mixing was done on Miss Alecto’s vocals make a very good album end up being more average than anything. Perhaps when they record the next album, they will clear these hurdles and show just how great of a band they are but for now, this is one album to listen to despite some small problems.