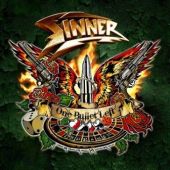 Thirty Years in metal is impressive as hell, and it is if it is in any music. Metal maniac Matt Sinner is such a man who has become a humble figurehead in the world of metal music and no matter what band he is in or has formed. Sinner will be a bright and shining star that is his legacy.

One of the originators of the whole German metal thing in the early to late 80's and even beyond that, Sinner still commands respect across the whole spectrum of fans and musicians alike. Still true to its roots, Sinner still keeps sounding fresh and inviting while bringing the heaviness to the foreground. Matt and company is showing the true heart and passion that all metal still holds in high regards even when playing with his other act Primal Fear.

Songs that are this powerful yet capture the listener in the deepest parts of the soul are so addicting are what we all live for. Making this music makes it clear that Sinner continues its domination in the scene. Tracks like the infectious 'Give And Take' to the Thin Lizzy-esque 'Atomic Playboys'. The intensity and love of the music they play shines through and hammers home the fact that metal is a force before, today and for years to come.

"One Bullet Left" is an album that leads to a time when metal was king, and it is the album that will help keep the music strong and healthy. A legend is someone who is unselfishly gives to anyone and musically speaking Matt Sinner has been one person that has kept the metallic ball rolling on for years – and we can all be thankful for that.