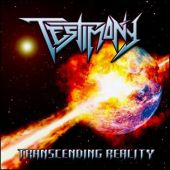 When an old guy like myself thinks back on the 80's and the metal emergence it's usually with a fondness and, of late, nostalgic reverence that often forces me to accept I'm getting on in years. That said there's still a lot of heavy metal music to keep me satiated and appeased long enough to gather my senses and keep fighting the good fight.

Indiana's Testimony issues its Transcending Reality debut, and after an initial listen I was impressed, however mildly. Upon my second time through I definitely hear some less-technical Hellwitch influences and quite a bit of progressiveness in here along with some familiar and even basic runs of thrash metal, complete with late 80's thin production values. While I can find some credible and viable elements to this style, I'm afraid there's two things that turn me off with Transcending Reality.

The vocals are pretty brash and wholly uninteresting for what they are, and something just isn't clicking with me. They almost seem too volatile for the music underneath; the technicality and sharpness that is the band seems to be buried when the vocals kick in. To be even more honest, if this was an instrumental album it would have less distractions for me. The other point of contention I have, which is somewhat minute I admit, is the absolute lack of creativity in the songwriting. The lyrics read like a sophomoric foray into American Lit note-passing, but to be honest it's something I've grown accustomed to in 30-years of thrash metal invading my ears. For me at this age the music is the catalyst and should always be the accepted vehicle, but my years of singing and lyric-writing have yet to fully leave me, and I always hear the words and tonal resonance right up in the front. It's inherent, I guess.

The positives of the record are the bass, which is both played incredibly well and mixed pretty decently. The amazing techniques and walking bass lines are two of the highest points of the music for me. While the rest of the band performs exceptionally well at this entry level (especially the guitar work) it must be the bassist in me that is drawn to those plundering lines of bottom end that are so often criminally unrepresented. Also the arrangement of the music is top-notch, showcasing a true understanding of the nuances and tightness necessary to create mini epics within these tracks. The chugging mid-section in “Society's End” is all I ever wanted to hear in 1987 and, quite often, I found it nearly every underground thrash record I could find. It's cool to see it touched on here, but not overcooked. The guitar solo here is pretty cool as well; I'm not sure if the guys in the band will take my constant reminiscences of the 80's as a slight, but it's honestly a compliment to be associated with such a brilliant and influential era.

While there are a few things about Testimony that leave me a bit wanting, there are some fascinating and fluid musical elements that cannot and will not be denied. Yes, the production is thin and dated; yes, the lyrical content is suspect, seemingly rushed and undervalued; yes, the vocals are often distracting or even pedestrian. However, the music and musicianship here is really quite admirable and tangible, filling voids wherever some might be gaping or looming. As a whole there are issues, but broken down to the basic elements this shows a simmering brilliance that can only get better with some wrench turns and WD-40. These guys have some promise and hopefully they'll keep at it.

Unsigned bands are the backbone of the metal movement, as they have been throughout its history. All of these bands who rock out in anonymity for their art are at their cores risk takers, pushing the boundaries of metal more and more - keeping the whole metal movement alive, feeling new, fresh and hungry to kill false music everywhere. In a world of corporate music cut and paste artist, metal is still a style that is unabashed and holds the middle finger high for the men in suits to see.

Chicago’s Testimony is perhaps one of the most impressive and least known unsigned act out there today. Sounding like a balls to the wall Thrash band like Overkill with the accenting blasting wall of Death Metal like Death to add in... this band proves that they can play, an play damned hard. Even though the recording of this EP has way too much on the treble end of things and that is the cause of losing the power of the bottom end in the process, it never masks any of the talent and power this act has. Combining both Death and Thrash into one is simply sheer brilliance.

Each of the six tracks are extraordinary in the way it powers through the speakers, even through the tinniness of the recording and a few gaffs that pop up now and then. It does not take having an advanced PhD in music to hear how great of musicians they are. 'Release From Lif'e is the track that is the standout for me because it is seven minutes and some seconds of just amazing metal played at the highest of levels.

If they can acquire a good recording deal, and the right producer to bring it all together, Testimony could be in command of a huge fan base in a very short amount of time. I hope that the powers that be throughout the metal label world will take the time and seriously consider this band, and then put their money on the line to get this band out to a drooling global metal audience within six months.

This is a band that screams out to be heard and promoted the hell out of. I am hinting to you in the recording field, don’t be stupid, sign these guys.