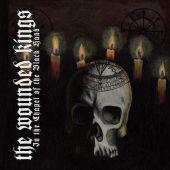 Type: Full-Length
Release Date: 2011
Label: I Hate Records
Genre: Doom
1 The Cult Of Souls
2 Gates Of Oblivion
3 Return Of The Sorcerer
4 In The Chapel Of The Black Hand

“In The Chapel Of The Black Hand” is the third full-length from UK-based “apocalyptic” Doom act The Wounded Kings. This review is free from any notions of and comparisons to their previous work, to which I have not been acquainted.

The Wounded Kings have all the awesome and cliché elements that create this darker brand of Doom- Hammond organ, heavy guitars, a lead vocalist that can command your attention (but doesn’t always). As such there’s a very cliché feel to this whole album, which at first I felt was pretty mild, but as the songs progressed there were in fact a few “areas” that got pretty warm. The vocals are the real stand-out here amongst all the other players. This chick Sharie has a laid back approach with her melodies that work, but leaves room for more risks. Her vocals have this flat, almost throaty quality that is toned down with a tinge of vibrato- very cool, almost like a light fuzz. It works extremely well in some parts, but that flat, almost nagging quality is too much to layer on to each song. I feel myself a little uncomfortable and worn out on it, craving something a little earthier, something fuller to counter the heaviness. Although I have to say… it works like a charm on the track two outro.

I mean, that shit is incredible, and the risk-taking is definitely there. It’s got all the qualities of greatness and madness I think they’re striving for, even though I feel it could be even more powerful. This outro-'Gates Of Oblivion' titled '(III) The Arrival', is for me the best part of the entire album. It embodies the sprouting, potential greatness of this band.

The Wounded Kings has a pretty dark aesthetic- the music, the visuals, the words… there’s a skull on the cover, I heard something about Lucifer in there. I don’t know what they’re into philosophically but at least on a sound level it seems that they haven’t yet had their enlightenment cherry popped, but have certainly fooled around. This is a band to definitely watch out for.