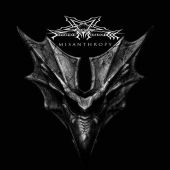 This is quite interesting album which has many different styles in it. And it applies to instruments as well as the very wide spectrum of sounds coming from different throats used to record this material. This album is a real good mixture of Death, Black and Doom Metal with a little eastern influences.

You can hear a little Bathory, maybe early Emperor, mid-to fast-paced tempos with Black Metal chords and many different vocals - sick, haunted howling, shrieking, spoken, whispered, screams, sometimes all of them at once. Some tracks sound as if they came from Emperor's "Anthems...", great guitars and haunting atmosphere. Some other riffs and passages remind My Dying Bride, hypnotic riffs played few times, you listen to it and you're in a trance. Some of them start with slow tempo, building up the atmosphere before the the cacophony of vocals starts again and you hear the frantic wall of bass drums, executed perfectly as in any other track on this album. You can also hear Kreator's "Black Sunrise" a little.

Stones Are Eternal' and 'Misanthropy' - guest vocals done by Androniki Skoula, known for guest vocals on albums by Rotting Christ, Septicflesh or recent brilliant album by Hate. Some other tracks remind me a little of Darkthrone's attempts to sound punk-ish and dirty. But this attempt is much better. 'Only the Dead...' is my favourite track with the eastern elements, really good atmosphere.

The only disappointment to me is the last track. It reminds me of Behemoth's 'Lucifer' too much and again this is not my favourite Behemoth's track. But if you like 'Lucifer' you should like 'Misanthropy' (the title track). Overall very good album, something different, with many ideas and very hard to put in any specific genre. And that's what I like the most in metal.

Poland is still one of the main exporters for some of the most extreme metal that has ever been made. This previous Russian ally country has brought to my attention so many bands that I now love and revere (Vader, Behemoth, Decapitated). One band in particular has really impressed me, one that I cannot seem to stop listening to over and over again... Pandemonium.

Combining the crushing power of commanding and very brooding Doom with some venomously heavy Death Metal not to mention insanely demonic Black Metal, Pandemonium delivers an impressive slab of music that is powerful as an atomic attack. With the trifecta of Extreme Metal all on one album, you gotta know that we are in for a treat.

Checking out the album, you are sucked into its power and constant movement of such songs as the mighty hammer like 'God Delusion' or the spacey heaviness of the title track. Each are a perfect blend of all of these styles into a full on heavy metal experience. Completely heavy and yet it is full of ethereal power and lyrics that are. Add in some of the heaviest and spookiest vocals that seem to rip at the very fabric of a person’s soul, Pandemonium clearly is a band to be feared yet exalted. As a band, they have evolved into a Ubber-group, the next level in metal kind.

Pandemonium has been around for 20+ years (originally called Domain) and are a re-discovered diamond of metallic might. I have heard some of their past recordings a time or two - but "Misanthropy" is their greatest achievement for them - and is a very amazing album to all others.