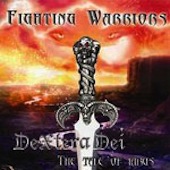 Type:
Release Date: 2005
Label: Self Released
Genre: Power
1 Pain Of The Soul
2 Dextera Dei
3 Stop The Crying
4 Out Of My Hell

Have you ever listen to an album, only to think that the album is a rip off of other artists even though the lyrics are different? I am in that state of reviewer hell right now as I go to work writing about a Power/Epic/Prog band from Italy with the very horribly sad and very cliched name of Fighting Warriors.

This very cheesy and uninspiring band from Sicily says that it takes it musical direction from the likes of Stradovarius, Dream Theatre and Symphony X. Let me assure you that is only what they say, and not what I am hearing. The sad reality is that Fighting Warriors are a very sad, musicallly stereotyped outing that have a lack of innovation, any shred of originality and having some hope for some fire or true passion for the whole epic metal thing.

With such insanely laughable lyrics and music cut and pasted from the whole metal spectrum into one it would be a waste of time for me to write about any of the four songs that are on here. Opting to clearly state to keep away from shit like this. Imitation is the sincerest form of flattery - as the saying goes, but let me assure you - this album is simply a rude slap in the face for all of the bands out there that are hard at work trying to create original pieces of metal.

I have already decided that this would serve better as a coaster under my beer or as a chew toy for a crocodile. With such disturbingly bad production, completely half hearted attempt at writing songs - all the while stealing of every good riff and fashioning them into something that is beyond the backsliding of mediocre - forget the name of Fighting Warriors and you will never waste your time ever. This one is pretty laughable.