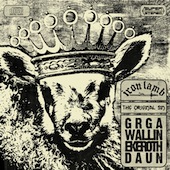 Type:
Release Date: 2011
Label: Pulverised Records
Genre: Punk
1 Rotten Wood
2 The Original Sin
3 Dubious Preacher
4 Our Demise
5 Poison
6 Suicide!
7 I Don’t Wanna Be Like You
8 I Don’t Like You
9 Iron Lamb
10 Dead Inside

The Punk vs Metal thing has always been there to some extent since they both were born. I remember listening to both as a young and starving musician. I was trapped between, my metal buddies thought I was a little too punk, and my punker buds thought I was too ‘Banger’. A fact that still makes me proud. I am a metalhead through and through, but I always have the punker inside of me also. It makes me who I am.

Swedish band Iron Lamb is a straight ahead Punk‘n’Roll band made up of extreme metallers like Johan Wallin (General Surgery, Repugnant) and Thomas Daun (Dismember, Incision) out to make some different yet shockingly raw music. It is crass, straight to the point and in your face Hardcore Punk at its finest in the same vein of the likes of GBH, Dead Kennedys and even Canada’s DOA as well. Music that has a bit of flavouring of Metal mixed in to its slam dancing excitement, and brings the connection to metal full circle in the band.

Self-written Punk anthems like 'The Original Sin' and 'I Don’t Like You' go right along side of their punk interpretation of the Motorhead classic 'Poison', and brings the whole album together. Iron Lamb make some great punk songs, and is such a way that most metal people could actually get into. It is not crossover kind of thing, but in a way its better in many ways that will make most punks and bangers take real notice.

Some headbangers will disagree with me and ignore this album because of the Punk thing, but I just tell those people to just take a listen and shut up. It clearly just shows the basic fact that even punk has influenced what metal has become and will always play a part of what metal has come to define no matter what genre it is. Iron Lamb is a band that sums that up rather nicely, and they are from the extreme ends of metal itself.

I am still a true diehard headbanger and that will never change until the day the bury my sorry ass in the dirt, yet I gotta let the punk out of the dungeon sometimes to wreak havoc the odd time. He is a mean and rather spiteful little tattooed fucker, but he still is a part of me. Enough said?