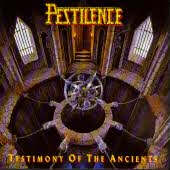 Looking back, I have to say that Testimony of the Ancients was the last interesting Pestilence album from my point of view. The development of Mr. Mameli and his colleagues strongly reminds of that of Mr. Schuldiner (R.I.P.). Both bands hit the scene with a primal force and then became victims of their own technical capabilities. In the end, the question arose whether a name change would not have been appropriate at the right time. On the positive side, however, the 1991 work is still stylistically comparable to the sounds on the superb debut - at least if you don't take it too closely.

Of course, from today's perspective, details like the partly dreamy solo in 'Twisted Truth' are harbingers of the stylistic aberration that marked the follow-up work Spheres. I also doubt that it did the flow of Testimony of the Ancients any good to include an atmospheric intermezzo after each track. Nevertheless, to this day I still like the basic aggression of the eight full-fledged songs that still shines through everywhere. 'Lost Souls' represents a particularly clear example of the fact that Mameli was not yet too shy for rather straightforward, fast and deadly neckbreakers. Admittedly, there are also some bulkier compositions where the band does not always strike the right balance between song-serving structures and demonstrating technical qualities. But in 1991 I was still willing to grant Pestilence a pioneering role and trying out new ways did not seem reprehensible to me.

The production of Testimony of the Ancients has strengths and weaknesses. I like the sharpness of the guitars, the high level of transparency and the fact that the bass lines are also well audible. The lead vocals, on the other hand, sometimes come up short. Mameli acts somewhere in a crypt in the background. In addition, his yelping is simply one-dimensional. It becomes clear why he had previously left the vocals to his ex-colleague van Drunen. In contrast, the integration of the sporadically used keyboards turns out better. As soon as they appear, they give titles like 'Prophetic Revelations' or 'Testimony' a different shade and flavour. All in all, the record can be said to have a good sound.

It makes little sense to single out any of the eight complete pieces. Pestilence perform on a high level, both technically and compositionally. They offer strict high-speed outbursts, technically playful, partly very melodic interludes and morbidly howling guitars, but also a Maiden-esque guitar line that appears twice in 'Stigmatized'. However, Mameli and his cronies managed to cleverly integrate the influences from the different directions into their own work. Somewhere between traditional metal schemes and the technically complex, sophisticated approach of their contemporaries from Morbid Angel, Pestilence found their niche on Testimony of the Ancients, which they were able to fill with life thanks to their distinct craftsmanship and enthusiasm. I must confess that I miss the raw brutality, the directness and the clearly structured riffing of Malleus Maleficarum, but nevertheless it was and is easy to become friends with the album reviewed here.

This is Pestilence's most interesting album, I cannot say if it is the best because Consuming Impulse is one of the best death metal albums ever, but it's way more conventional. Composition wise it is entertaining but this album is even more edgy, it has a wider sense of progression. The production is way more polished than on their past albums, especially Consuming Impulse that is raw and heavy as fuck; on this album they coined a cleaner sounding atmosphere, that fits the new concept perfectly I think. Every instrument can be fully heard and appreciated, and the keyboards and guitar synth blended nicely with the traditional metal instruments. The line-up changes –Mameli taking the vocal duties and the addition of Tony Choy on bass guitar- worked good with the “softening” of the band’s sound towards a more progressive and elaborated brand of DM, without losing the aggression and violence as their main arguments.

Vocals aren't as deep as Van Drunen's, more mid ranged and raspy. The words can be heard clearly but still with a horrified tone all over them. Guitar’s distortion isn't as raw as on their previous album -it’s acid and thin- giving the bass guitar a lot of breathing space. There are some riffs that explore higher notes and mysterious vibes rather than just the average dark and heavy DM atmosphere; hints of melody and weird dissonant chords that contribute to the intriguing “open space” atmosphere that reigns over the album. Bass guitar tone is very organic, Tony Choy's preference for finger picking can be noted in the rounded low end, that is present all the time but I would have it even louder on the mix… guitars aren't that noisy and the bass is just there chilling –with lots of class of course- so there’s some punch missing, not in the songs themselves but in the sound.

Even if I would have liked it a little heavier; the distressed, jazzy production gives the album a different and fresh sound compared to what almost everyone was doing in 91’. And it brings the cymbal work to the front row in the percussion department, giving a quiet setting to the passages that need it. The drumming is tight, very aware of the riffs and thought out. The whole drum kit sounds extremely acoustic, as if you were in the same room. Fast parts are fierce and the most elaborated beats sound interesting as well as the numerous fills that bedizen the main riffs.

Testimony of the Ancients features a meditated investigation in different textures that go beyond the heavy metal comfort zone but its journey is led by DM, it’s always the base. That’s what makes this record important, and better than let’s say Spheres; which is too progressive and kind of loses the fire. I find the tracks in between songs kind of boring, except from the bass solo 'Soulless' that fucking rules, and maybe 'Free Us from Temptation' that sounds very sinister. Lyrically there’s a subtle change towards a more meaningful direction rather than just the classic negative imagery, but I still don’t love them. And regarding the songs there are no highlights really; the album is pretty constant in quality!