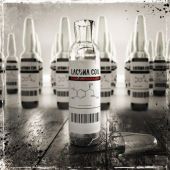 Type: Full-Length
Release Date: January 23rd, 2012
Label: Century Media Records
Genre: Gothic
1 Trip The Darkness
2 Against You
3 Kill The Light
4 Give Me Something More
5 Upsidedown
6 End Of Time
7 I Don't Believe In Tomorrow
8 Intoxicated
9 The Army Inside
10 Losing My Religion (REM Cover)
11 Fire
12 My Spirit
MetalBite on YouTube
MetalBite on YouTube

This one I actually got after Broken Crown Halo, their newest because I really enjoyed the music on that one. Here, there's maybe a little bit less of Cristina, but it's still a quality album altogether. I'd say this one is a mix between alternative/gothic metal all into one. I don't think that I'm misinformed in assessing that for this one, what matters as always are not just the lyrics, but the music. I can't say that this is overly heavy guitar-wise, though I do think that they tune uniquely to maintain the "metal" sound, but the tempos here aren't fast at all. My belief is that they never really want or wanted to sound overly heavy, they're more attuned to a quest of epic glory. The music here exemplifies that.

Lacuna Coil's concept in songwriting is such that they want the vocals to match the music. On here, you have that concept in action, not saying that this is a "concept album", just reiterating the fact that their strategy is to be fitting. There are 2 vocalists in this band and there were about the same amount of amount of male voice with of Cristina still in the spotlight though. I only say this because on a whole, her voice carries so well as it's clean and absolutely beautiful. Male vocals keep the harder sound of musical core and keep it heavier sounding. I admire both vocalists, though Cristina has one voice that's so translucent it glows with every word sung -- that's how she comes off to me.

Not to get too much into the sub-genres or genres in general -- as Chuck Schuldiner said, "metal is metal." There is a definite groove/vibe to this album that draws the listener into the music. The use of keyboards is prevalent though they don't drown out the music. There is a sort of reverb sound to this release -- it must've been the mixing/production effects of it. It flows throughout the album. I would suffice to say here that Dark Adrenaline is a little bit of a less of a heavier sound to it than their latest -- I think that they experimented a lot with different mixtures of the guitars, keys, vocals and overall consistency. They grab me on every tune, though I think you have to love a lot of genres of metal to like this.

I firmly disagree with a lot of ratings out there -- I think a lot of what's been writing in disdain for the importance of what they created here was lacking in the album scores. Just because it's slow, it's still metal to me and upbeat. They have this essence to their tone and the album captured that. Again, not to get into lyrical concepts, but their words definitely match what they create musically. A feel, a melody, a groove, a mix of all of these really captures their core concept. It seems like an overall effort by each musician on here, they really delve into a deep array of guitars and the music itself in unison. I think that Cristina puts in the most heart to her voice spoken or sung, she's the core.

I'd say that there were a lot of songs on here that I liked, if not all of them. Remember, this isn't an overly heavy album, just the guitars are down-tuned for thickness, but there's a lot more vocals both male and female that you have to suit your musical pallet to like the songs. I believe that this band has a lot longer career than most metal bands because they play not for heaviness for the sake of heaviness, they're more of a groove-laden band even though they do fall under those 2 sub-genres. Pick this up to support the band and metal, it does a lot of justice!