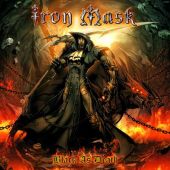 Over the many years I have been in and around the metal scene, I have developed only a few pet peeves that I cannot shake off. One of the biggest of them all is those bands that never develop one shred of anything that is even close to being original. I hate when these living tape recorders copy riffs and melodies that they never ever hide, and just use them over and over again.

Iron Mask is a neo-classical/Power Metal outfit from Belgium. Set in the style that has the bar set by such masters as shredding gods Yngwie Malmsteen and Dragonforce. They seem to work the same exact side of the street, riffs and melodies seemingly being very familiar to the point of being blunt. The band can play and play at a speed that most out there cannot do - but it is speed without originalty that buries the band from the first note on.

Over the thirteen tracks they have offered up, you get riffs as sweeping as any Malmsteen track or one that soars like Dio era Rainbow, there is even some Judas Priest straight ahead powers added in on the slower ones. The album sounds large and massive trhroughout, but with ever riff and melody from guitars to vocals, you get the feeling that they have ‘borrowed’ many of them. It does sounds amazing, but because of the all sound alike riffs, it tarnishes anything the band might have.

Some will love the power and shred-speed of Iron Mask but for the pure metallers out there, this just seems like a band that pukes out ever riff that they have heard. With such a massive amount of talent in one band this turns out to be very disappointing. I was underwhelmed from the start.