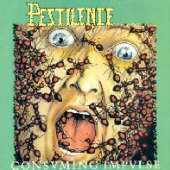 Today it is hard to believe, but old geezers like me can honestly assure you that there was a time when Pestilence released really good albums. Consuming Impulse, whose mix avoids serious defects, is among these works. I admit that it has never reached the status of the fantastic debut, at least in my opinion. Why? Well, the death metal elements have gained the upper hand, although there is still a remarkable quantum of thrash in the compositions. From this follows, to address painful subjects right at the beginning, that some tunes rather focus on death metal bluntness than on lacerating guitars. For example, the first two songs do not score with special compositional ideas. They celebrate a feast of brutality without keeping an eye on musical brilliance. Even the Slayer-like solo of the opener is going nowhere. Yet things get better, Pestilence are able to improve.

As soon as some effective riffs shape the songs, the Dutch crew reaches for the stars. The thundering drums guarantee a mostly hellish velocity and the hoarse growling of Mameli seems to originate from hell, too. "Out of the Body", for instance, shines with exciting leads after a short warm-up period. The guitars create an excellent flow with a tiny melodic touch, before lead vocalist van Drunen hogs the limelight. His brutal performance gives this song (as well as the other ones) a very harsh and craggy overall appearance. That's a fine fundament, even though rather atypical elements like the occasionally occurring spooky keyboard melody in "Echoes of Death" enrich the album. Speaking of this track, it is driven by powering guitars and, of course, straight and fast drums with the effect that the mix of melody and violence creates a special fascination. Moreover, the rarely interspersed melodic elements enrich the entire album.

Further highlights show the energy of the early Pestilence. The rabid and fast "Suspended Animation" serves as an example. I enjoy its very coherent main riff which leads to mercilessly straight verses and an equally straight chorus. Not to mention the fact that it is also equipped with a horrifying keyboard line. "The Trauma" with its somewhat weird chorus constitutes another track where drummer Marco Foddis seems to be under high pressure, because he thrashes his kit without remorse one more time. But he is also responsible for the majority of the appropriately apocalyptic lyrics. Pestilence's odyssey into obviously drug-imbued Spheres has not yet begun and uniqueness is an abstract term whose value is absolutely unknown. Thus, the dudes from the Netherlands are heading for complete devastation and the fact that some solos border on chaos appears only logical.

28 years after the release, it can no longer be overlooked that time has taken its toll. In 1989, this aggressive force left a huge impact and was nearly a gift of the Gods. But today, it can be deemed as a more than solid, but not overwhelming work with definitely more highlights than lowlights. This is no accusation. Senile geezers like me know that there is no chance to ignore time. To grow older is nothing for cowards.