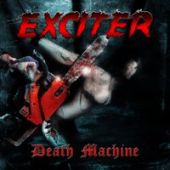 It is not easy to define the point of time from when Exciter started to deliver exclusively simply structured songs. I think it was a creeping process. Whichever way you look at it, the special chemistry within the band is gone forever. This would not be too serious if the group would limit itself on live shows to celebrate their classics in the best possible way. But Exciter released this album. They cannot expect to have a bonus due to the band´s name or its history. Every new output should be measured by the usual standards. In turn this means that I listen to their tenth studio album ("New Testament" not included) with mixed feelings.

Very generally, I feel comfortable with a simple songwriting, but Exciter overdo it. The first four songs follow the same pattern without the tiniest distinction. Is this still simple or is it already stupid? You decide. Here are the facts. The songs are based on unclear riffs. Without being thrashy, they just make noise. I would not go as far as to call these riffs bad, but they are really nothing extraordinary. The up-tempo rhythms always sound the same, tempo changes are not included. It would have been too much effort, I guess. I have no desire to blame them for the usual verse-chorus-verse-chorus scheme, but every chorus is formed by just one line (the song title) and it seems to be a pleasure to repeat excessively this line. Thankfully, the fact that they always accord to the same approach also has its good points. Each and every chorus energizes you because of its power and dynamic, although the vocals sound somewhat limited and thin. However, the result is that the band delivers four fairly strong songs which are unimaginatively arranged. It is fun to sing along to the choruses, but it also does tend to get a little bit tedious. "Power and Damnation", track number five, marks the temporary peak of creativity. It follows the same pattern, but it offers mid-tempo. Unbelievable.

The remaining songs do not surprise the listener with something unexpected. With the exception of "Skull Breaker", they are just weaker than the tunes at the beginning. When I speak of "Skull Breaker", I do not mean the untitled useless guitar solo which is hidden at the end. Quite the reverse, it leaves me confused due to its senselessness. But far worse than this detail is the production of this album. If one did not know better, one might think this is the first demo of semi-professional lads. Congratulations, if you are able to identify the complete drum parts. More details could be addressed, for example the suboptimal guitar sound, but this does not make sense. The truth is that you are not having fun with this output, if you are not a die-hard Exciter fan. But if you have a soft spot for these Canadians, you get an album with some pretty decent pieces - just listen to the first three songs, and once you have gotten used to the fact that Exciter offer a ridiculous sound in a certain regularity, you might even think that this full-length constitutes a wonderful highlight. But that would be foolish.