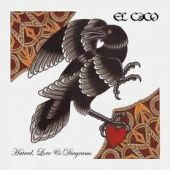 This is an excellent Alternative Rock sounding album that recalls bands like Tool is on offer from El Caco. There are a lot of rhythms that will become ingrained in your brain, through a smooth approach that is easily digestible, but written with intelligence. The band gives off the feeling that their simply having fun and chilling out to the music they’re making on most occasions of this disc, but the mood is still relatively dark overall.

The rather hazy vibe of the album is demonstrated on the second track 'Hatred'. The mature alternative vibe of the album is comparable to Tool again. There is also a feel that echoes the excellent release from last year from Junius as well. The catchy, groovy aspect of the band echoes what you might from a band like Queens Of The Stone Age. Overall, this makes for an interesting combination of elements. However, the band is still a couple of steps below the finest efforts from any of these bands and this is because they aren’t quite able to carve out their own identity quite so well. Also, the music here tends to be structured a little simplistically. Regardless, the songs are very well-written, emotionally poignant and artful overall.

Though there are improvements that can be made, a standout alternative Rock album that has some riffs that would lend it to metal as well is certainly a welcome relief. "Hatred, Love And Diagrams" was a pleasant surprise and a very solid album overall. It comes recommended for fans of Rock music as much as it does those of Heavy.