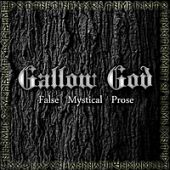 Heaviness is an inherent trait in metal and some bands naturally have it in spades. Through its history, metal have strived to become heavier and more nasty as well, to push the boundaries of musicianship to the breaking point without losing anything from where it had developed from. The UK has given us many heavy bands, originators Black Sabbath, the heavy lads Motorhead and the UK Doom gods Cathedral. Another name might get on that list: Doom Metallers Gallow God.

Gallow God can be summed up very simply and effectively: Very Heavy Doom Metal with intense melody. It is this strong attention to the melody while still being some of the heaviest Doom around that makes the statement. No amount of hype or putting on a spin by some overly paid A&R person could make this type of a declaration and be able to back it up with every word.

Slow and ominous with the strength of melody, each of the four songs on this EP seems to shape into a story that is heavy and melancholy and yet seems to capture the imagination and sends the listener into the realm that is made. I cannot think of too many bands that could pull this all off while being so heavy. Some bands do come to mind, but Gallow God seems to be the one I enjoy.

The UK have been one of metals most prolific band producers and once again they have done just that with greatness attached. If you like Doom played in the traditional way, but played very heavy, you just got the band that will deliver it. They deliver what you need, but yet you get a whole lot more in the process.