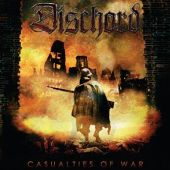 For years, I have been telling the world that Canada is the newest hotspot for metal and the world is starting to see. One of those bands that is starting to make the world notice the metallic might of Canada is Moncton New Brunswick based political thrashers Dischord (not the punk band of the same name).

Taking the styling of old school Thrash like Exodus and older Testament and some 3 Inches Of Blood, adding in some Hardcore elements a la Agnostic Front and the some progressive way of arranging things, you get Thrash that is Superthrash. Talented and brutal, Dischord seems to be on the verge of something remarkable.

Songs like the nasty Speed Metal tinged Thrash of 'Silent Genocide' that shows a razor walk of balance between full on chaos and talent rich control, while the slower and darkly menacing hammering of 'Shadow Demon' pounds into your mind and shows a fiery yet natural maturity that some acts never get throughout an entire career. The whole album goes on like this, walking that tightrope and succeeding with each and every note the band throws at the listeners.

Gotta say that I am impressed as all hell at the moment, not to mention a proud Canuck. Dischord is a band that shows that all Thrash is not created equal. I may have coined the phrase earlier, but it still holds true. This is Superthrash, and as a Canadian, I gotta be proud as hell. You know, I am.