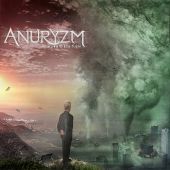 I have always said that knowing nothing about a band can be a good thing. No previous judgments or notions to go on, just the music and the scattered pieces of information lovingly dug up. It is what makes this sort of work interesting. I knew nothing about this band that I will be telling you about.

Based now in Abu Dhabi by way of Lebanon and Canada, guitarist John Bakhos was a up-and-coming musician with his creation Anuryzm in his native land. Due to circumstances and tragedies he needed to move around in different countries and finally revived his band. Combining the groove of Nu-Metal with both a Progressive angle and some Metalcore splashed with Death Metal at times he melds his unique vision of metal for the masses. Imagine expertly combining the rhythmic drive of Disturbed ramp up the heaviness and the add a several influences like Progressive/Thrash/Death/Metalcore - then feed it many cases of RedBull... you’ll get what this band is all about.

Even though the music on the surface seems to be like all of the other Nu-Metallers out there, I can tell that this band is different. With impressively complex music that has this shrewd and descriptive lyrical content, Anuryzm seems to be many steps over the lack luster of the Nu-Metal Scene. I did like the whole album immensely, even though I am not a card carrying Devotee of Nu-Metal. Stunning songs like blast of 'Breaking The Ballot' or the nasty riffage of the albums title track pounds home the notion that this band is different, and gets me excited about them.

As impressive as this album is, I see success if this band continues move towards getting heavier while going slightly away from the Nu-Metal grooving but even if Anuryzm stays on this path, the band still deserves to be checked out. Don’t get me wrong, "Worms Eye View" is more than just a good album, but for my taste is not quite there. Many will think otherwise, but they are not writing this review.