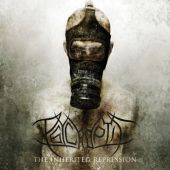 Buy on: Bandcamp
Type: Full-Length
Release Date: 2012
Label: Nuclear Blast
Genre: Death, Technical
1 Carriers Of The Plague
2 Forward To Submission
3 Euphorinasia
4 The Throne Of Kings
5 Unmasking The Traitors
6 Become The Cult
7 From Scribe To Ashes
8 Deprivation
9 The Sleepers Have Awoken

Psycroptic is a band that burst onto the Tech-Death scene back in the early 2000’s with a very unique sound to add to an (at the time) blossoming sub-genre. With their sophomore release, "The Scepter Of The Ancients" they effectively put together the perfect storm with their vocals unique style, fresh riffs galore and an overall sound that defined them as Psycroptic. Soon afterwards however the group lost their front man.

Subsequent albums failed to garner as much praise, largely due to the change on the vocal front. The replacement, Jason Peppiatt was a solid vocalist, yet just didn’t have the same feel to fit the act. In 2008 "Ob(Servant)" was released, and while not reaching the level of acclaim that "The Scepter Of The Ancients" did; it did effectively give hope to fans of the act that they could all work together to recreate a collective feel. Enter 2012, and the release of "The Inherited Repression".

In spite of any short comings of the past couple albums, I looked forward to this release with an abundance of anticipation. In nearly every way I was filled with disappointment upon absorbing what it has to offer.

"The Inherited Repression" is in many ways the exact opposite of what Psycroptic revealed in a decade ago. Death vocals are more or less absent throughout the album in its entirety; instead the guys opt for Jason’s more Metal-Core styling and ever annoying ‘tough guy’ shouts. New and engaging riffs that can carry the listener throughout entire songs are replaced by generic, uninspired segments yearning to follow through, but always falling short. A cohesive sound that drips with a unique flavor has vanished, in trade for what is now a very vanilla feel void of personality. Technical prowess is lacking, and instead we get a rather streamlined, safe infrastructure to songs.

There is nothing inherently bad about this release. The production quality is good, and the performances are technically sound. That said, with apparent lack of inspiration and their choice of direction on the vocal front "The Inherited Repression" never truly manages to wallow in much past mediocrity. Once again, this album can be summed up in one word; disappointment.