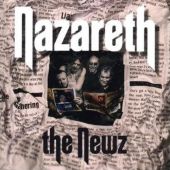 Growing up in Canada on and playing in seedy bars and outdoor beerfests, you could not get away without playing covers of two iconic bands music at least a few times throughout the night. One was AC/DC and the other was Nazareth. If you played in a rock cover band, you needed a few cover songs of both in your set list to be taken even half-heartedly seriously and got paid at the end of the night. Scotland formed and now London based Nazareth is a rock staple.

Even though they had only one monster hit, (and so many minor ones as well)Nazareth was a Hard Rock band with few equals. I have played ‘Hair Of The Dog’ hundreds of times over the years live, and it always has been a blast to play. Now that I am listening to a new album from my formative rock years idols called "The Newz", I am reminded of the joys of Nazareth while waxing poetically about it all.

Songs like the romping riffs of 'Goin’ Loc'o, the AC/DC-ish 'Road Trip' to the rocking blues shuffle of 'Mean Streets' are pure Nazareth gold. Showing that the band still sounds the same, and rocks pretty good, they have not advanced their sound or made radical changes to what they do. But some things don’t have to be changed to still be good, they just have to still be good, and the band still is just that.

I liked the album all the way through. I still am a big hard core metalhead yet these old rockers still are a inspiration for me. They may not have changed the formula but like new Coke vs Old Coke - Old Coke still kicks ass. Newer metal people might not like the album and find it truly dated on many levels but taking the time to listen to it, it shows you will see how Nazareth had influenced many bands that now grace your I-Pods.

History is still relevant... so is this band. The new legions of rockers all over the world should know and love them for what they have given us, and what they can offer us now as well.