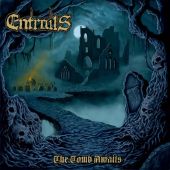 Swedish death metal does not allow a great musical variety. Its framework is clearly defined. Low-tuned guitars, grunting lead vocalists, lyrics about violence, death and cemeteries (in this sequence). In view of these prerequisites, I do not understand the visual design of The Tomb Awaits. Instead of seeking its niche, it is extracting the aura of "Left Hand Path" out of the pores. A compounding factor is that "Unleashed Wrath", the first track after the intro, includes a treacherous guitar line. It sets in at 2:10 and seems to be directly taken from Entombed´s classical debut. Entrails is definitely not in danger to get an award for originality. At this point I would like to make a short statement: originality, piss off! Good music does not ask for individuality, not in any circumstances. Riffs, mightiness, decay - these are the things I want to hear and feel when spending my time with Swedish death metal. Entrails do not want much asking.

A major success factor of the monolithic full-length is its professional, well balanced and absolutely dense sound that creates a nightmarish scenario. In view of the intensity of the production, you must have a very rare preference for shitty rehearsal recordings, or you will quickly find out that the appearance of the drilling guitars as well as everything else is absolutely flawless. Surprise, surprise - I would tend to the latter. It gets even better, there are some songs that also deserve the verdict "flawless". First and foremost, I refer to the gigantic "Collection of Cracked Heads". This steamroller unites heavyweight groove with murderous precision. Among other things, the guitars add a simple melody while running the octavos up and down. The catchy yet merciless chorus crowns a sustainable masterpiece that nails the listener with sadistic pleasure to the wall.

Apart from this highlight, Entrails performs a useless acoustic intro and ten technically well-constructed songs that completely obey the guidelines of the lethal genre. Flattening riffs meet eccentric, sometimes woeful melodies while the vibrant drums manage the different velocities without any problems. The ordinary yet rigorous vocals match with the powerful guitars. Honestly, I do not really like the self-limitation of the death metal vocalists. I suspect that most of them do not make full use of their potential. But at the end of the day, this is of minor importance. A few atmospheric parts round off the picture, for example the haunting sequence at the beginning of "To Live is to Rot". Only a softened guitar line that shows up in "Undead" does not fit into the context of the brute full-length.

In accordance with the musical content, the lyrics also offer classical death metal stuff. In other words, the lyrics are bullshit. However, they increase the violent aura of an album which stays true to the old school. As a consequence, it does not revolutionize the genre. Death metal without frills, this is the simple maxim of this blood-drenched combatants. Nevertheless, or perhaps for this very reason, The Tomb Awaits represents a more than solid work and provides both the kind of entertainment and the high level of professionalism that you can expect when buying a (Swedish) death metal album.

One can make the claim that all Swedish death metal sounds the same, or at the very least eerily similar to one another. To the layman or non-fanatic this might well be true; the under-educated death metal fan won’t be able to differentiate between Grave and Entombed, or Bloodbath and Morbid, which is unfortunate. As a longtime fan of the genre I can spot differences immediately, as can most of the dedicated DM contingency. That said Entrails encompasses the early 90’s death metal sound to an absolutely criminal degree, but it’s oh so good! In fact, it’s perfect!

For a band that pretty much lay dormant for nearly 20-years they came back pretty strong and brought some of the old country’s roots with them. Has this particular sound been done already to near-perfection? Yes, but you might offer a small reprieve for Entrails because, in all seriousness, they’re just insanely heavy and horrifically brutal from start to finish. The Tomb Awaits represents a piece of time when the death metal movement was so underground National Geographic couldn’t have unearthed it. Coming off Tales from the Morgue Entrails embodies the deepest recess of filth and musician degradation that one band can legally offer the public. This might well be a contender for album of the year for me; it’s really that good and that destructive! You can see where bands like Bloodbath found that elite sound. The opening clean tone title track sets the mood for something tempestuous right around the bend; it’s literally the calm before the storm, and it’s implemented so well that one can’t help but be drawn like the Pied Piper’s rats towards the gates of Hell…we all go willingly. From the anguished screams in “End of all Existence” to the chugging guitar riffs in “Unleashed Wrath” this album is the single best death metal album I’ve heard this year. The production is of top notch quality with every note shredded accordingly in my brutalized ears, and the vocals are never buried in the mix, which is much better than a plethora of musical mud. These guys know their death metal and I sincerely hope they garner so much underground accolades that they can’t even sleep without creating more music of this constitution.

Many people might call this a rehash or a blueprint for other albums before it, and they may be right. However, following that train of thought, how many bands are doing this style effectively in this modern era? How many Swedish bands have embraced the sound to such a pinpoint degree and made an album no less viable or entertaining? Have we heard this before? Of course we have, but we can hear it again as long as it’s done to such a high point and Entrails is the second coming of the Swedish death metal movement. Even the mighty Bloodbath didn’t create anything this brutal, and that’s just a fact. Each track on here represents the most violent, disgusting, repugnant metal music available in the best, most defiantly honest delivery possible. The reason I can fully back this band and album is because you can’t recreate that ancient sound without living and breathing it. Here in the U.S. we have so many good death metal bands that are producing some stellar music, but the Swedish scene seems to have given way to nostalgic recollection and downright disgusting embellishment from ne’er do wells. As “Total Death” trudges into my face at full speed I can’t help but imagine myself being in the middle of Sweden back in the early 90’s and imploring these guys not to quit for nearly two decades! I remember well when Grave, Nihilist/Entombed, Convulse and a slew of other great European bands emerged from the death metal underground and it was a fantastic shot in the arm at 18-years of age. Now, at nearly 40, I’m revitalized momentarily with another shot into my fleshy parts with Entrails’ brash attempt to assuage the nay-sayers with some truly punishing music!

I beg you; find this CD, record, 8-track, reel-to-reel, whatever you can score (just don’t steal it!!) and listen to this majesty with all of your horrible soul. You’ll be taken to places you didn’t think were still simmering below the surface.

Sweden’s Death Metal scene is still one of the more prolific scenes on the planet and it is known for some ass-kickin’ extreme metal. This small nation has brought out some of the more classic acts in this blood splattered genre and has shaped many minds as well. One of the more unknown of the bands from Sweden is Entrails (not the disbanded band that was from Avesta), a band that just might surprise you.

Sounding like a conglomeration of all Swedish 90's era DM, the band on the surface seems not to offer up anything in the way of anything new - and that is partially true, yet it does not either. Sounding quite a bit like fellow countrymen Entombed... Entrails take that power and style and deliver some solid Death Metal that is still so pleasingly biting to the metallic pallet.

I love most of the album as it batters you with time tested good ol’ Death Metal straight into your cortex. Song like the Entombed-esque 'The Slithering Below' and the more Thrashy/Death explosion of 'Undead' show the band can diversify if needed to. Even going a bit Doom Metal on a couple parts of songs as well, but they do not do it as much as I felt they needed to. As a whole it is a very good album, but I am looking for a little more variant in the way the music is made - a little originality could not hurt as well.

If your looking for intense straight on Death Metal Entrails will be the one suited for the itch you need to scratch. If your looking for originality in your Death Metal, perhaps looking at other bands would be the best way to find that. You can decide for yourself if you like it or not. Personally, I liked Entrails album but I was expecting a little more than what the album ended up giving.