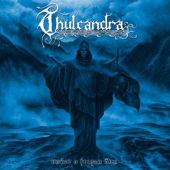 Very rarely does a band in this era come along and batter my senses to the point of a mushy-mass impotency. For any black metal band to garner this much favor in my eyes is a rarity of high order; there simply isn’t enough originality or style today to break the confines of my little chasm of old-school blackened music. But once in a half-moon a band emerges and clears the murky waters and reclaims your faith in some things new. Thulcandra is that band, especially evident on the sophomore release, Under A Frozen Sun, which is nothing short of magical.

After the brilliance that was last year’s Fallen Angel’s Dominion it was tough to figure out where a band like Thulcandra could or would go or what else they can tap into that would remain vibrant and engaging. That befuddlement went wayside after 'In Blood And Fire' kicked in and decimated the sensory aura within a 30-foot radius. Vocalist/guitarist Steffen Kummerer once more channels the ancient specters of black metal’s glory years (anno 1991-94) and offers a myriad of damp, cold chords and vocals that set apart the current black metal officers from the lowly wannabe grunts. I once though the only band to truly rival Dissection’s primitive and ghoulish sound was Vinterland, but I’m once again happily proven wrong as Thulcandra has not only bested the sophomore jinx but eaten it alive and spit out the bones. There is simply nothing wrong with this record, period.

What songs like 'Ritual Of Sight', 'Gates Of Eden' or 'Echoing Voices' provide is a tempestuousness that lay deep within the recesses of the black metal fan’s jaded psyche. At one point even the most ardent fans of the movement found nothing even remotely credible with the recent rash of bumbling buffoons belittling the once-proud genre; one listen to an album of Under A Frozen Sun caliber and you quickly realize there’s hope for the true fan to find something tangible in a sea of half-wits and deplorable imposters. This album is exactly what "Storm Of Light’s Bane", "De Mysteriis Dom Sathanas" and "Welcome My Last Chapter" began so many years ago; keeping with the strong tradition Thulcandra calls upon such varied influences but refrains from outright thievery and collects your attention like souls to a cult. From the haunting ease of short acoustic passages to the empowering brilliance of freezing, atmospheric power chord undertows the record here is one of true passion, giving away nothing to trend or expectations past the band’s vision.

It’s not very often I offer such gushing praise simply because I’m hopeful enough to think that some bands with over-abundant talent should always try to stick to a winning design. That doesn’t mean the albums should run together as AC/DC has done for the last 30-years, but subtle changes and implementation of fringe influences are not a reason for total submission to a demographically-influenced change in style. That said Thulcandra takes a track like 'Echoing Voices (A Cold Breeze Of Death)' and manages to evenly level the line between ancient black metal and modern death metal to such an elevated point that you can’t help but believe the thinnest of margins can be achieved with some effort and incredible gifts. Steffen and company have it, and if you’re seeking a black/death metal effort that bleeds honesty and total reverence to the once-proud movement then do yourself a favor and pick this up at September’s end.

What better way to ring in winter’s arrival than to blast this album on your way through wintry landscapes and punishing cold?