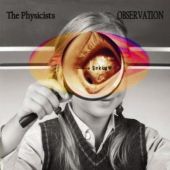 Gotta say, this Finnish band is a real odd one... sort of strange even. I have never came across something like this except on Spinefarm Records releases. In reading the bio and everything, it just got weirder and then I listened to them. Gimme a beer... this is going to a very odd ride.

Sounding like a odd spawn of Rammstein, a third rate Frank Zappa with a fuzzed out slower and Industrialized Death Metal style with the song ideas of 80's one hit wonder Techno-pop star Thomas Dolby.... you get The Physicists. These crazed musicians that are probably rejects of the tv show The Big Bang Theory, playing fuzzed out wannabe-and-never be Metal - and not seeing the true reality. With techno keyboard drivel and lacking any real musicality... it is a album made for forgetting.

With ten songs on the cd, it is ten too many. With only a small fraction of something that could even remotely seen as being metal, it plods on with lack luster rhythms and annoying almost child-like keyboards through out with raspy vocals that are sort of like Skinny Puppy but with even less talent than that band. Every once in a while, there is a flash of metal, then it is gone... like if metal was like the Bigfoot.

If you like stuff like Rammstein, this one might be for you but if you want metal, this is not the thing to hear. With a name like The Physicists you think they were smart enough to see what metal was, and their talent is not metal, but perhaps mopping the floor in a rehearsal studio after the real band had used the space, or reaching a ‘Special Ed’ version of Science.

Guess this band’s collective IQ’s are in reality smaller than their shoe sizes, if the believe the are playing metal.