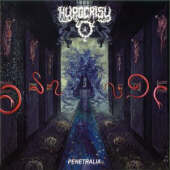 “Penetralia” was the infamous Hypocrisy’s first release. Peter even back in ’92 was cutting and producing fine ass records, and this is no exception. What separated Hypocrisy from the other death rabble, for me, was always the crisp and crystal production values that Peter instilled with every release for his trump card.

To cut straight to the point, “Penetralia” is a primitive release, what is now generic song titles are readily abound throughout this release, ‘Burn by the Cross’ & ‘Left to Rot’ being fine examples of this. But it is death metal, so suffering and butchery are the norm. What is not the norm is the superb musicianship displayed by these five lads. Masse Broberg (vocals) and Jonas Osterberg (guitars) are no longer with Hypocrisy to my knowledge at this moment, but when they were they did an outstanding job. Masse handles his death bellows with true class and style for one so young.

For ’92 this was kick ass, now it's still a pretty wrenching affair, and has not really lost much. There are a few small glimpses of what Hypocrisy are today, mostly in the epic 6 minute closer and title track, ‘Penetralia’. Complete with keyboards for a ’92 death release, this song was something of a landmark, slow brooding chanting and rhythmic drumming create a classy tempo for the end of the debut Hypocrisy album.

Bottom Line: What usually ruined albums 10 years ago was the shit awful production, make no mistake, this is ultimate production and fine death tracks.