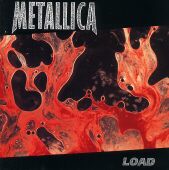 That's not liquid fire on the album cover, in fact it is blood and jizz wedged between two sheets of plexiglass. Yes, I know, gross. Grossed out is what a large part of Metallica's fanbase felt after their first time listening to 1996's Load. Allow me to put this into perspective for you. Half a decade Metallica fans had to wait anxiously for the next album after their self-titled black album in 1991, which already saw Metallica going through a transition from the progressive melodic thrash metal of Master of Puppets to a more stripped down and simple heavy metal sound. This is the longest amount of time fans had to wait between releases up until this point. Their first four albums were regarded as classics in their genre that every metal head should listen to, and the consensus for their fifth album was considered mediocre yet passable material by many. Load is by all means not even a passable offering.

The first song I'd ever heard from Load was the single, "King Nothing". It's comparable to "Enter Sandman" off the black album prior to this, but Metallica isn't just more of the same on Load. They've changed their tune, and the aforementioned single along with the album opener "Ain't My Bitch" are probably the heaviest tracks the album has to offer. Metallica have traded their thrash metal sound for plodding riffs, guitars drop tuned a whole step down to standard D tuning, and copious amounts of wah. The songwriting has become much more predictable and commercial. There are two songs in particular, "Bleeding Me" and "The Outlaw Torn" which stretch over 8 and 9 minutes respectively, and within all that time at the band's disposable these tracks manage to go absolutely nowhere. Worse still, "Mama Said" finds Hetfield singing over an acoustic country tune and it is here where Hetfield's vocal style change is put out on full display. One thing I can say about hard rock and heavy metal is that you don't necessarily have to be Luciano Pavarotti, but if Hetfield seriously thinks I'm going to subject myself to his voice over acoustic guitar, he's got another thing coming. The worst song on the album has got to be "Hero of the Day" though. If none of the other songs on the album were evidence enough, this song comes on and I feel like I'm listening to "Tiptoe through the Tulips" by Tiny Tim. Did Metallica forget the name of their own band?

Kirk Hammet's overuse of the wah pedal isn't the only obnoxious component to Load's delivery, but James Hetfield sounds nothing like he did in years past. There used to be a ferocity in his vocals that haven't been present since this album's release. Sure, one can't expect a vocalist to sound good forever, I can forgive someone for aging, but Hetfield's vocals have become downright cartoonish. He sounds like he's trying too hard to be macho, and often adds an extra 5 syllables to every word he utters. To make matters worse, Load often utilizes multiple vocal tracks. which tells you what you need to know about this era of Metallica. They have shifted their attention from writing thoughtful music to writing sing-a-longs. Then you have songs on this album like "2x4" which I'm 99.9% sure is no one's favorite Metallica song. Hetfield sings like he's literally about to fall asleep. What about Lars Ulrich and Jason Newsted? Unfortunately, they do absolutely nothing of interest on the album, they might as well be phone-in studio musicians because they don't make much of an impression, they're just there to fulfill their roles.

Overall, Load is an amalgamation of commercial southern rock and the zeitgeist of the 90's heavy metal music scene. Metallica were listening to bands like Alice in Chains and Corrosion of Conformity around this time and it shows through in their songs, but those bands were able to pull off this style of bluesy southern rock. Metallica on the other hand have nothing to really showcase on Load that hasn't already been done before and done better. They were once one of the biggest names in heavy metal, but here they've produced some washed up redneck rock that sounds more suitable for a WWE wrestler's theme song as they walk out to the ring. Let me stress that I can handle change, but this is simply not a change I am willing to embrace or endure. There is no saving grace for this album other than the fact that it isn't St. Anger.

Umm... This is a different band. I grew up with Ride the Lightning, Kill 'em All and the classic great Master of Puppets; those were albums that molded metal into what it is today. This album seems to be coming from a band that would make a great touring partner to The Black Crowes. Don't get me wrong, as a piece by itself, it's decent rock n' roll with some pretty slick guitar riffs, but as the band's 6th full length album, it is definitely a harbinger of doom to the Metallica sound we all grew up with.