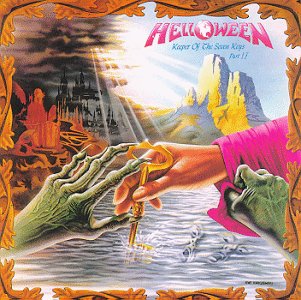 In my quest to find European power metal that doesn't suck in my younger years in the early to mid-2000's (hey, let's face it, there's a lot of wimpy power metal out there) I would come across band after band that I personally just didn't care for, Dragonforce hadn't quite broken out just yet with "Inhuman Rampage" re-igniting the younger crowd's interest in the genre, but I was still fortunate enough to dig up and listen to snippets of bands such as Rhapsody, Hammerfall, and Blind Guardian... none of which would I have chosen to listen to over Metal Church or Razor, but it was enlightening to get another perspective on what metal could do in other contexts when the focus wasn't so aggressive, sometimes even happy to a fault. Helloween's Keeper of the Seven Keys Part II is the first album that comes to mind when I think of albums that have influenced modern power metal more than any other. It pulls out all of the stops with fairy tale lyrics, uplifting and joyous chord progressions, and all in all isn't very... "metal" by my account, though that's more of a subjective viewpoint. Either way, I did see the magnificence in the album. So much so as a matter of fact that I actually listened to this one before listening to Keeper of the Seven Keys Part I, and I'm pretty sure it's against the law in some countries for metal heads to not follow albums in chronological order when they are split into multiple parts.

How could one blame me, part two is longer, has one extra track on it, has the namesake of the duology at the very end of the album, and has one of the best album covers I've ever seen. In the grand scheme of things, the two albums aren't all that different from each other, though I will say that I was truly missing out by skipping part one and fixating squarely on this album because with each Helloween album one will notice this very slight gradual shift in the band towards an ever increasingly pop oriented sound, and by the time we get to this very album, I think we can sing its praises from sun up to sun down about everything that it does right, Michael Kiske's voice is still among the greatest regardless of genre, the original operatic and theatrical sound, the originality of pioneering an entire subgenre, the memorable guitar solos. It's fantastic, but it certainly lacks any good or creative riffs with much of the material on the album being constructed of mere power chords for the majority of each song. It might not be that noticeable if the only thing you had to compare it to was Keeper of the Seven Keys Part I, but if one were to revisit Walls of Jericho, then listen to these two albums back to back, it becomes way more noticeable that the band does seem to be losing their ingenuity along the way.

In small doses, that's not necessarily a bad thing, I personally found the band's debut to be too technical to want to come back to it as much as I do these two albums. So it all works out for my tastes, but the only real issue I take with Keeper of the Seven Keys Part II is this shall we say more authentic power metal sound the band really starts to pioneer here with slaphappy tunes such as "Dr. Stein", "Rise and Fall", and to a lesser degree "I Want Out", a song which could be covered by a pop punk band and no one would bat an eye over it. Not necessarily skip-worthy material, but certainly makes for a less consistent listen when they're stacked up against the glorious and brave "Eagle Fly Free" or the multi-dimensional title track, a kind of masterpiece of a song that many used to think only a band like Queen could write with their magnum opus "Bohemian Rhapsody". Helloween seemed to have something to prove, to not allow themselves to be outdone by their former work, part two needed a thirteen-minute epic to rival "Halloween" to cover all of their bases. Job well done as far as I'm concerned, but I have to say that I do prefer "Halloween", and the first part of the duology in general. Both are great, but "Halloween" has the benefit of being on an album that is actually more guitar oriented, Kai Hansen, Markus Grosskopf and Michael Weikath were still writing decent riffs would inspire someone to pick up a guitar for themselves, part two really has very few of those outside of "Eagle Fly Free".

It was this very direction that influenced original guitarist/singer Kai Hansen to take his leave from the band to form his own power metal band Gamma Ray shortly after the release of Keeper of the Seven Keys Part II, I like to think of Helloween and Gamma Ray as the Metallica and Megadeth of the power metal sub-genre, a guitarist breaks away to form his own band that would rival the success of the band he was previously in, and wouldn't you know it, the band would suffer from his absence as fans ridiculed and shunned the next few albums to come after his departure including the oddly named Pink Bubbles Go Ape and the complete and total descent into pop music that was Chameleon which Kai foresaw as early as Keeper of the Seven Keys Part I. Part two is closer to that pop oriented material than the average listener would expect. I like the album, but I think everyone out there saying it's a masterpiece are forgetting about the obviously weaker tracks among the greats here. Often times I find that an album only needs two or three good songs and everything else can more or less coast on the coattails of the bigger and better tracks and so long as the rest of the material isn't outright garbage, most people will still call it a masterpiece, Keeper of the Seven Keys Part II is definitely one of those albums. It's a step down from the previous album, but still one that should be highly sought after by fans of the genre.