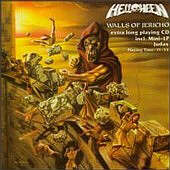 Saying that a band is classic, most writers try not to throw around the term lightly but I will go out on to a limb here. Helloween is one of the originals of Power/Thrash metal, even though over here in Canada they were not as well known. They were a band that I liked right off the bat... and they ARE a classic, if you ask me?

Strong hook laden songs and power that even a panzer division never had these German thrashers have perfected the Power/Thrash thing. With a mixture of catchiness and dominating aggressive music, these metal legends showed the world of the mid eighties, that they could compete in the metal world and make their mare permanently on it.

Songs like the infectious title track 'Walls Of Jericho/Ride The Sky' shows the power and melody of this band blending so well into a formidable metallic beast. It is the nasty guitar assault of 'Guardians' that show the brilliance and unabashed talent that Helloween truly does possess. Metallica might have made the genre, and were - I think that Helloween has anonymously set the true standard of it. A remarkable feat for a band that was virtually unheard of in North America.

Aside from their ‘Helloween’ song and video, Canada and most of the metal world have not been introduced to Helloween - a sad state indeed. I remember when hair spray bands like Poison and Cinderella all were the thing, listening to Helloween. I remember thinking that Helloween could kick their asses. You know, that statement still holds so true to this day. A classic album that every true metal fanatic needs in his/her collection.