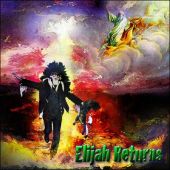 Type:
Release Date: 2011
Label: TTM Records
Genre: Hard Rock
1 Who Can Stand Alone
2 Change Comin’ Down
3 Fifth Trumpet Blow
4 Fallen
5 Jesus Gives
6 Wells Without Water
7 Am I Immortal
8 Yahweh, You Are All
9 I Am Protects Me
10 Kevin’s Law
11 Elijah Returns

In some circles of metal, Christian Metal/Rock is not looked upon well and seen like a joke or some laughable parody of real music, but Christian based Rock and Metal, like our Black Metal brethren have intense passion for their message. Prophet Azal "Elijah Returns" is a concept album built around the strong religious beliefs of a slide Blues guitar master known as Gypsy.

Asked by God to spread the word of the coming end of the world, Native musician Azal spreads the word that had been given to him- that is the basic concept of the album, as Gypsy and his friends use a combination of Led Zeppelin/Molly Hatchet and old school Blues based Metal/Hard Rock to spread his faith. What you have here is straight ahead old school ballsy metal with a direct message. Whether you believe or not in the religuous leanings of this band you have to give credit to the band.

Through eleven songs, the concept Gypsy and company are creating is firmly front and center. These are unbending Christian based songs, but sadly it is the music is not that good to hold up the message. With repetitive melodies and a horribly recorded album, it reduces the impact that the artist wanted from it by over half. Song structures seemed almost ridiculously patched together, even though Gypsy seemed to be a great musician - seemed stiff and nothing flowed like it should have.

This could have been a really good album, but because of the problems with the recording values not to mention the stiffly and very cheezy made songs themselves - makes it seem almost amateurish and very uninspired. I read that Gypsy is better known as a slid blues player than a rocker - perhaps his message would be better suited to use that, than the old school Hard Rock/Metal. I commend him for trying to do something different, but urge him to go back to his bread-and-butter blues and let rockers play what they do best... this was not good.