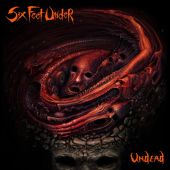 How do you prepare yourself for writing a record review for a band that is an undisputed legends without coming out sounding like your either ass-kissing or as sounding like you are completely bitter and jaded? Here is what I try to do in that situation: I do it very carefully, take my time and try not to be shithead about any preconceived notions I might have.

Back in 1993 a titanic Death Metal machine was born as a simple side-project of Chris Barnes(ex-Cannibal Corpse) and Allen West of Obituary fame. When Chris was unceremoniously ousted from Cannibal, he threw oneself hundred percent into SFU... and the metal world applauds that decision. This band has it all: animalistic spat vocals, guitars that are laser sharp and the bass and drums so pounding that it will crack your skull with every savage beat blasted out.

Old school death with a bit of groove to it makes for a wall of pure decapitating pleasure with every masterful tune these guys offer up. Good examples of this are songs like the very heavy and caustic 'Missing Victims' that oozes violence and pain while the vomit inducing 'Molest Dead' makes your skin crawl with ever disgusting word. SFU have had a few disappointing albums over the past few years. "Undead" just makes up for those, and any other album that might come.

Looks like the Death Metal Maestros have got there mojo back in a big way, and now are firing on all cylinders. I have been waiting for the Six Feet Under battleship to right itself after the dissatisfying and discouraging albums "Commandment" and "Death Rituals" as they both were very uninspired albums that seem not to be anywhere close to the blood stained glory of their earlier releases, but this album does bring not only respect, but fear for other bands because they are back and better than ever.

Clear a seat on the DM throne and bow to the ones that approach in victory. The rightful rulers of the DM Kingdom are back in charge. Pity the weak... they will die first.