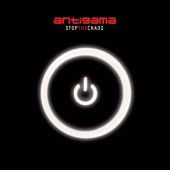 I am amazed at the many offerings of Death Metal that comes from all over the world, and places that you would not think of as having a metal scene. It seems like this style of metal has reached a global status that is impressive, and inclusive. Pretty good for a genre that is shunned by mainstream music in general who try to shove the over produced and over promoted Lady Gaga down our throats... they have no idea that we have the true talent.

Poland’s Death/Grind masters Antigama are truly veterans in the metallic trenches. After five full albums, loads of split albums and now having this EP to add, they put their stamp on the music with a gigantic boot, yet problems are now arising with this newest release that are hard to ignore. Sounding somewhat dated and uninspired on this album, this metal juggernaut is not what they once were.

On the surface, "Stop The Chaos" EP seems to be a good album, but upon hearing it closer - its diamond luster is nothing but cheap glass. In each of the six tracks, there seems to be an overall feel of complacency... as if the band is fine with just playing the same sort of things over and over again. Sounding run of the mill and under developed throughout, the music just falls into the category of just average. Making noise for just noise sake rather than doing it like on their amazing album "Resonance" (power and musicality matching the heavy grinding goodness) and other earlier releases.

It was not a very good album, considering how long the veteran grinders have been out in the scene for. It seems as if the band just put out this EP for nothing more than to have something out for the sake of it. It is a shame, they are one of only a handful of Grindcore/Metal acts that I had liked over the years. To make it clear, this is not even close to one of their best works and I stand behind my views on it. Skip this one, and move on people.