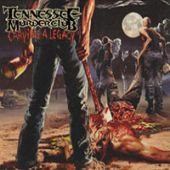 Out of the sleepy state of South Dakota, where usually the most fun that you can ever have is getting drunk and pushing over sleeping cows under a full moon or try to impregnate your neighbours daughter without the father catching you comes a band that puts ‘blood, guts and gore’ back into the metal lexicon, and then some as well. Alcohol paralysed Hillbillies and the mentally slow need to beware - the Tennessee Murder Club is looking for its next victim...er...fan.

This may be nothing out of the ordinary for Death Metal, but Tennessee Murder Club is in a blood soaked and murderous category all by themselves, pounding out very solid old school Death Metal with an added ferocity that usually comes from extreme Black Metal. Each horrific song lyric that tell the tale of suffering, eradication and how to do killings, seems to top any of the Stephen King masterpieces, yet seems to always lead into another story of perverse disembowelment and the humans capable of such sadistic things.

Listening to the bloodletting that every Tennessee Murder Club song gives, shows that a new crop of Death Metal is alive and kicking ass. Each eviscerating word and brain spattered thought send with the bludgeoning music is 100% pure blood-letting Death Metal. Nastiness comes on a disk with eleven of the most gore splattered songs ever. They have not done anything new to Death Metal, but they have firmly defined it once again.

I have been waiting for some true Death Metal to re-appear and set the bar higher in the scene for people to strive for and now my wish has become true. Looks like the Tennessee Murder Club has truly brought it back with no nonsense Death Metal at is glorious and blood splattered best.