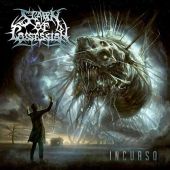 Whatever type of music you're into, there's undoubtedly the heroes of the genre - the ones that started it all, or, the ones that changed the game to bring the genre into a new direction. Here in technical death metal, Spawn of Possession is just that. Beyond legendary and greatly missed, Spawn of Possession came around when tech death was starting to flatline and, along with other legendary names such as Necrophagist, Anata and Psycroptic, they helped bring the subgenre into a new direction by breathing new life into it. Of the bunch, SoP is my favorite. 3 of the 4 bands are no longer together and the other has been dead to me since they got a new vocalist, so it's quite sad to see this generation of tech death disappear like it did. Of course, I was merely a toddler while all of this took place, but I'm alive in 2021 to appreciate their works now. "Incurso," the third and final full length by Spawn of Possession, is an incredible album that takes the listener on a, err… very technical and destructive journey. With lots of pinch harmonics.

The style of "Incurso" and their previous two albums have often been copied, but very rarely is it done as well as SoP did it. It's some of the most mechanical, labyrinth technical death metal you will ever hear. Each song is like a cornfield maze, with so many twists and turns and dead ends and stop starts that'll leave you absolutely befuddled. Riffs come and go, come back later at an unexpected time and break down into other riffs without notice. It always keeps you guessing and on the tip of your toes of what they're going to throw at you next. The ol' "play that riff again, but don't play that riff again." They'll do the same riff multiple times, but don't expect it to be the same as the first time you heard it - the band adds in minute details each time to freshen up their already used riffs. Spawn of Possession mastered this art with their debut and continued to tweak their craft as they continued to release albums. On "Incurso," this riff formula is at its peak. There's a load of monstrous riffs on this record, chunky, groovy and technical. Don't forget all the great melodies and leads - "Incurso" has all of those too, and they're in every song without fail.

The fretless bass is fucking sick on this album. I don't remember previous SoP albums having fretless but I could be wrong. It sounds magnificent on this record. The bass player has plenty of parts to shine and they make the best of all of it. Super cool bass leads on this album. The drumming is, of course, ridiculous. They hired a new drummer on this album so Dennis could focus more on his vocals. Safe to say he gets the job done with explosive drumming that bangs away and uses quite neat cymbal work. The vocals are definitely better than the previous two albums. He spits, bro. Like, he goes hard in some parts, and I can see where Oliver from Archspire got a good chunk of his influence from. This dude took his vocal only opportunity and ran with it. He sounds fucking sick on this album.

What else is sick on this album? These fucking lyrics. That's right - the guy who never talks about lyrics is mentioning the lyrics on this album. I got curious due to the obvious song "The Evangelist," and good God. The lyrics in this track are gross as fuck. I love it! Such a horrible, twisted story and it really makes the song a lot better - I personally think it's the best song on the album, not only because of the lyrics, but the vocal approach and the riffs are just sick. The ending of this song is so Gorguts. I notice a lot of Gorguts influence on this album which I fucking love.

This review is pretty redundant because every tech death fan knows about this album. How could you not? It's often cited as one of the biggest game changers in the genre along with their other two records, and its praise is well deserved - this is one of the best technical death metal albums ever. No questions about it. Every aspect of it is top notch from the songwriting to the lyrics and it really is unparalleled to this day. A real shame that they split up before the follow up album could be released. It's only been 4 years to this point so there's still hope they can get back together one day. Honestly, I think they need a new album more than Necrophagist does. They have a lot more going for them. Until then, this is a great album to end your career off and most certainly a classic despite it being less than a decade old as of writing this. So fucking good.

Spawn of Possession performs a very chaotic form of death metal. The music here is infused with blast beats galore and played at maximum possible speed. One thing I noticed is that this band is tighter than a lot of Origin’s material and a little bit more cohesive. Still, the band wanders around many territories in these songs and could be more balanced sounding. The music is brutal enough, but the real focus is on the speed of the songs.

As stated, they have more cohesion than Origin, but a lot less cohesion when compared to the best death metal like the band Death. Their progressive masterpieces simply put this to shame and feature much better song-writing skills. I do enjoy brutal death metal and this band brings enough brutality to the mix to make an impact, but not enough to be wholly memorable. The songs here tend to drift by without anything to cling to on repeated listens unlike the best material from Death or Atheist. This is more brutal than those bands and this could be seen as a positive trait, but the band doesn't push the brutality over the speed enough and ends up sounding somewhat all over the place. The songs here are longer than past album and that would lend them to seeming to be more developed. They are certainly winding and twisting, but not always in the most positive of directions as the music here ends up sounding a little messy. One positive aspect of the music, however, is that it is fairly thrilling and exciting.

With decent song-writing this makes for a decent album and nothing more. The speed and brutality of the band take over things and overtake the cohesiveness that could have been achieved here. Check Incurso out only if you're the most hardcore death metal fan.

Technical Death Metal walks a very fine line between being just chaotic noise that has no melody or structure to it and having some very brutal melodics with some earth shaking heaviness. It is a walk that some are very successful in doing, while other are just plainly noise and soon fade away. Sweden’s Spawn Of Possession are one of those bands who actually do it right.

If you take the technical aspect of Bloodbath, the nastiness of Obituary and combine it with the brilliance of say Death or even my favorite GraVil you'll get Spawn Of Possession. They combine all of this and then add in their own originality. This is a amazing convergence of different parts that end up creating something that could be the next step in the extreme metal field.

Each of the nine tracks are extreme to the maximum, with razor sharp riffs and complicated time shifts but still hold a brilliant example of melody as well. Songs like 'Bodiless Sleepe'r and 'No Light Spared' are just a few of the prime examples of that perfect melding of dizzying speed, monstrous power, musical complexity that can be wrapped up in a firm hold of melody. Spawn Of Possession has all of this, all while doing it with originality, a feat that is very rarely pulled off.

I never thought that a band could ever top Bloodbath but there it is. Some might never completely grasp what the band is trying to do and that is a sad thing that they will not get it. Spawn Of Possession is a one of only a handful of bands that could have out done the Extreme Metal Gods that are Bloodbath, and I have found them.